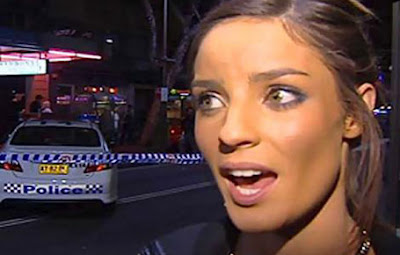 When I first got into this Inter-Webs thingy I took to it well, but I was worried. I knew that this fancy new technology could be used for goodness, but I had a sneaking, not-quite-paranoid, feeling that it might just be used by some for evil purposes.

As a reasonably tech savvy post baby-boomer, I also had some fair idea of what personal privacy was and the importance of protecting it. I also had a fair idea that once you put something out there into the internetesphere it would pretty much stay there. Forever.

Cut forward to the present – or Yesterday’s Future, if you will – and the Beer Bloke Prophesies have come to life in a dark and depressing reality. You see, some people have used this wonderous, toll-free information super highway to not only NOT contribute to the betterment of the world and its many peoples but to actually DECREASE the sum total of humankind’s achievements. We’re goin’ backwards, people!

Exhibit A. This week a young woman previously unknown outside her family and circle of friends and workmates became ‘famous’ for telling porkies. She described in detail the shooting of some random law-dodging oxygen thief by some other random law-dodging oxygen thief in Sydney’s Kings Cross. We’ve all told the odd fib but this was different because she told her whopper to a television camera which then deemed it ‘newsworthy’ enough to broadcast. Despite the fact that most ten year olds could tell that she was bullshitting. For a start, ‘wogs’ don’t call each other “Bro” – that would be the Kiwis, or Brothers, as we call them. The internet then kicked in and she ended up on You Tube where she received about eleventy-eight kabillion hits. Unfortunately none of them were directed at her dumb head.

Maybe that’s a little unfair. She was just being a dickhead. The fact that someone was lazy enough to think that this drivel was even newsworthy should be smacked upside his or her thick head with a rolled up wet newspaper (delicious media-related irony, don’t you think?!) but what’s worse is that this air-head has now been offered a gig with the same channel that was stupid enough to fall for, and then broadcast, her waffle.

The Virtual Media has created yet another person who is Famous For Being Well Known – like we don’t have enough of them already – and now the Real Media is stretching her fifteen minutes of “fame” further than the girl’s lack of credibility and actual talent. I know she didn’t go over to the camera when she saw The Dickhead Lamp go on just so that she could become a celebrity, but she’s certainly milkin’ it for all it’s worth in the aftermath.

And just like the kid at school who wore worms as a wig, stuck crayons up his nose and ate his own boogies, if we all stop looking at him, he goes away.

In case you’re wondering, the reason I threw this post in is that, while it’s not strictly about beer, there was a suggestion that her TV ‘appearance’ was a marketing ploy by Lion Nathan to promote a beer competition featured on the bus stop behind her. Probably should have mentioned that earlier.
Posted by Beer Blokes at 14:22

Email ThisBlogThis!Share to TwitterShare to FacebookShare to Pinterest
Labels: dickhead, You Tube

"the kid at school who wore worms as a wig, stuck crayons up his nose and ate his own boogies, if we all stop looking at him, he goes away."

Now I know where I've seen before - that worm wig was awesome!