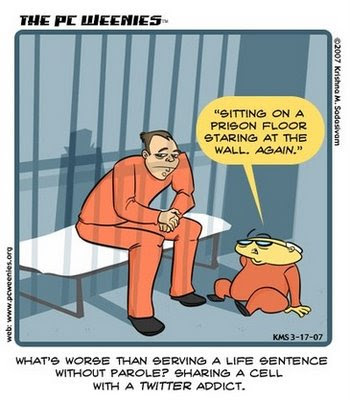 I am right into this blogging caper. Love it, really. Didn’t think I would but, there you go. I guess I just wasn’t sure why anyone would be in the slightest bit interested in what I thought or cared to write about. Some of my early ramblings probably supported this belief but, as time wore on, I learned to post what I guessed my readers wanted to read and tried to stay ‘on topic’ and entertaining.

But this shit is different. What is it with this Twitter thing? Is it just me that doesn’t get it? Someone told me it is a great way to get information to people quickly and easily. Isn’t that what blogs are ‘sposed to be for? Yeah, he said, but this is quicker and easier and you only use 140 characters and you can send them from your mobile phone. So, it’s designed for people too lazy to write a blog? Nah! Just for stuff that’s quick and immediate, you know? No, no I don’t know. Because I have seen Twitter and that is not what it seems to be.

I know of a few people who are using it’s immediacy and brevity to good use – to promote events, announce the tapping of a new keg/cask, and sending relevant information to plenty of people quickly – but these folk seem to be in the minority. By a lonnnnnnnnnnng way.

Twitter seems to have been over run by hapless drones whose lives are so NOT interesting that they simply have to share them with the world in order for them to become valid. Or maybe I’m just getting jaded and old. But take this as a prime example. Hugh Jackman, Aussie actor/heart-throb/all round good bloke gets himself a Twitter thingy going for his fans. Fair enough. This technology is supposed to be for people who need to fire off important stuff but don’t have the time to do it in blog form. Here’s a snippet, if I may;

“Having a great time. Plane just flying over the Sydney Opera Centre.”

Well, it’s nearly a sentence, isn’t it? But what gets me is that he is clearly NOT EVEN WRITING IT HIMSELF!!! I am just assuming this as, being an AUSTRALIAN and everything, he would be familiar with the Sydney Opera HOUSE!!!! Would David Beckham tell his fans that he was “just passing The House of LOURDES”? OK bad example, he might just be that thick, but you know what I mean. If the Twitter thing is for people too time-poor to blog, then at least do it yourself!

And, is there any danger that we might get something that is even vaguely interesting and that adds to the sum total of human endeavour? Or is that asking too much? Tweet away if you’ve got something to say, but please, please ... I’m seriously concerned that if we put too much more shite on this inter-web thingy, it will break.

P.S. I have just started collecting some Twatter gems for a series of posts to highlight the abuse of this fine technology. At least I think I will. I might get someone else to write it for me.
Posted by Beer Blokes at 14:57

Email ThisBlogThis!Share to TwitterShare to FacebookShare to Pinterest
Labels: twatter

Only tonight, I accidentally "favourited" an update about a casual acquaintance's "frozen arse" as they sit at the train station.

Surely you see the appeal of such an app, Professor?