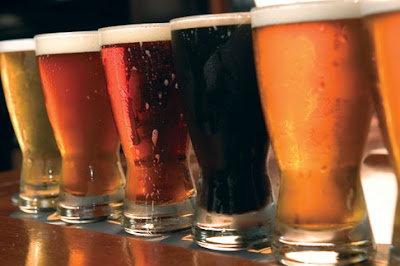 Time for me to put pen to paper and declare my Best Seven from the 50+ beers experienced by The St Kilda Taphouse Ale Stars.

Thanks to those who responded with their picks – don’t think I waited this long because I wanted to copy yours, rather than think of my own! Much ...

I thought about ranking them in order, but I think that’s probably akin to ranking your children by how much you love them. I had enough trouble getting my list down to just seven without the pointless task of serving up a favourite. So here goes ...

Part One; The First Few

Red Hill Imperial Stout. In the same way that some blokes say, “I only drink VB,” I used to be a bit of a “I don’t really like Stout,” sort of bloke. Until my very first Ale Stars night. The Guinness was the first up beer and made me realise why I don’t like stout – but by the time I got to the Red Hill, I had a bit of a Eureka Moment. I drink stout now.

Weihenstephaner Festbier. I am an unabashed fan of beers from this venerable brewing institution and had tried everything from the Original and all the various Weizens through the Pilsner (personal, all-time favourite) Vitus and Korbinian. But I had never had the Festbier. I remember commenting at the time that this one was ‘dangerously smooth’ for its drinkability which hid beautifully the higher alcohol content.

Timothy Taylor Landlord. Had heard SOOOOO much about this one from Shandy ‘Why don’t you and Timothy just get a fricken’ room’ The Ale Star Czar and remember that he had it as a his number one Pick Without Thinking desert island beer. I had not had a great deal of experience when it comes to English style Pale Ales and was not really expecting a lot of this. I got a lot more than I expected. Welcome to the list, Timmy!

The last one for Part One is Bridge Road Brewers Saison and for similar reasons to that I gave for the Landlord and Stout. A style that I knew of in name and theory only but one which now has some permanent shelf space in the fridge. Being able to share the experience alongside the brewer also made the night a little more special and for this reason alone I could slot this beer into the top seven.

The last three will get an airing tomorrow.

Glad we helped you 'see the light' even if it was veiled by the impenetrable blackness of the Stout!
Red Hill Brewery