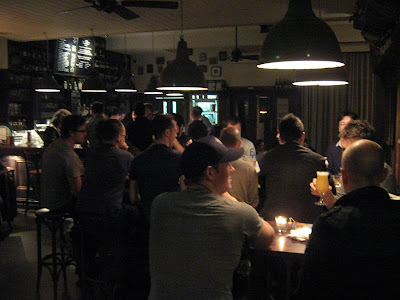 Here are the rest of the Ale Stars Best.

Schlenkerla Marzen Rauchbier. For many reasons other than just the beer, I am including this one in my Top Seven. This was a beer experience and, though I had had this one before it was fun drinking it in the company of those who hadn’t. From Chris’ pronouncement that; “Yay verily I declare that someone hath dunked a hock of smoky bacon into my draught”, to the announcement by Shandy that “It apparently takes 6 or 7 pints to fully appreciate this smoked beer” to the looks on the faces of the ‘first timers’ wondering what they had got themselves into. Classic. But the favourite moment of the night was when Shandy asked the gathered crowd if there was anyone who really didn’t like it. Brian quickly and proudly raised his hand as if to lead the room in revolt to find he had joined a club with him as the only ticket-holder.

Young’s Christmas Pudding Ale. This one had featured, coincidentally, in a Beer Dinner that I hosted on the Friday before Ale Stars and was almost a completely different beer second time around. Served with a rich chocolate brownie, drowned in Kahlua chocolate sauce the beer showed it’s ‘dark’ side with warm malty-coffee, chocolate and rich stone fruit notes. Served with pizza, the other side surfaced – fresher fruit tastes, coconut and (my personal favourite from Simon/Rob) butterscotch popcorn.

Hargreaves Hill ESB. A beer that has become more than just a well crafted and easy drinking American Pale Ale Style English Special Bitter. Beer. Just riht to kick off a session of Ale Stars – enough interest to satisfy the inner beer Nerd, but not too heavy that it spoils the feature beers. The quintessential SUB, I still recall fondly the first time Chris and I were sharing one upstairs when we bumped into Ben and Reeksy and we all recognised each other as ‘Ale Stars’. Not only was a friendship forged there, but so too the concept of Sneaky Upstairs Beers, the knowledge that this Ale Stars thing might be a long-term commitment and the realisation that Ale Stars was about to become more than just a beer sampling night.

And finally, Mountain Goat Rapunzel. The feature beer for the Belgian Blond Ale Ale Stars session, based on the Belgian classic, Duvel, and sharing the spotlight with the very same beer on the night. Coupled with the fact that head brewer and Rapunzel creator, Dave Bonighton was there and that Shandy WASN’T there – just kiddin’ – that he night was hosted by yours truly, made this beer memorable. The fact that it was universally enjoyed and also featured heavily in your comments on this blog as a favourite is testament to the worth of this brew.

That’s it. The Prof’s Top Seven. Special mentions to Bridge Road Brewers Chestnut Lager (cracker), Stone & Wood Draught Ale (almost TOO easy drinking!) and Holgate Nut Brown Ale (nicely surprising) as local offerings that served to please the crowds and highlight the health of the craft brewing scene in this country. Here’s cheers to many more.

Nice choices Prof, see you for a SUB next week.
Also particularly liked the use of 8 beers in your top 7. You can never have too much!

Didn't think anyone would pick up that I had snuck an extra into my top seven! Just couldn't separate them!