Dinner with The Beer Diva 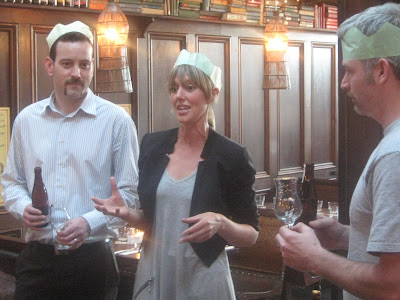 Christmas is a time for caring and sharing and what better way to show that you care by sharing dinner and a beer - or eight – with The Beer Diva.

The Beer Diva is Kirrily Waldhorn and a more appropriate moniker you could not attach. She just looks like a ‘Kirrily’. And while, in some circles the tag ‘Diva’ might evoke thoughts of stuffiness, petulance or arrogance, in the case of this Diva, the exact opposite is true. Relaxed, unpretentious and generous, she hosts a beer dinner as if you are all guests in her own home. Although she doesn’t run around looking flustered trying to juggle pots, pans and oven mitts, and then rope you into drying the dishes. 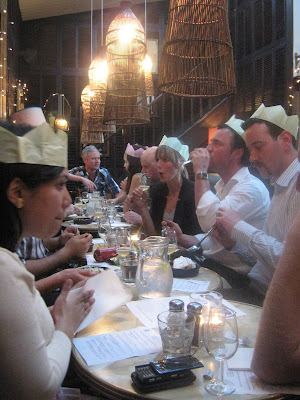 She does, however, look very comfortable sharing her passion for beer. A working lunch with head brewer Bill Taylor while working in the marketing department for Lion Nathan was Kirrily’s ‘Eureka’ moment – the event that made her realise her calling! Leaving to pursue a career as a Beer Diva (not sure wether it’s a degree or a diploma course) Kirrily has set out to share the Beer Word with beer novice and expert alike.

The Local Taphouse in St Kilda has been something of a ‘poor cousin’ to the mob in Darlinghurst who have had the pleasure of The Diva’s company on several occasions already. The second Beer Diva Dinner saw an intimate setting for around twenty, complete with Christmas tree and daggy Bon Bons, set alongside a menu of 5 courses matched to eight beers. You do the maths, that’s pretty impressive in anybody’s addition.

A Bridge Road Saison on arrival was followed by a Hoegaarden Wit and a risotto of prawn, lemon and coriander with snow pea tendrils and an introduction by The Beer Diva to the wonders of beer. A Hofbrau Helles with tempura zucchini flowers stuffed with ricotta and honey on an ajo blanco gazpacho may sound like a combination for which you might seek the advice of a medical specialist but was, in fact, a gastronomic delight.

Head Chef, Richard, emerged from his culinary cave to share his secrets with the dinner guests including the revelation that each meal (apart from the cheese plate) incorporated beer in the recipe. Game On! We decide we had to detect and identify each one.

A 2 Brothers Growler and a Hargreaves Hill Celtic Red were pitted against (or alongside!) each other and a main course of braised ox cheek with red wine jus frisee and glazed shallots and while the descriptions of the aroma of the Celtic Red were, to say the least, varied, all were in agreement on the deliciousness of the food. A Samuel Smith’s Oatmeal Stout and a hazelnut torte served with Chantilly Cream was just the ticket for those needing a sweet fix and the perfect pairing of three distinctly different cheeses with a Leffe Brune was the ideal finish. 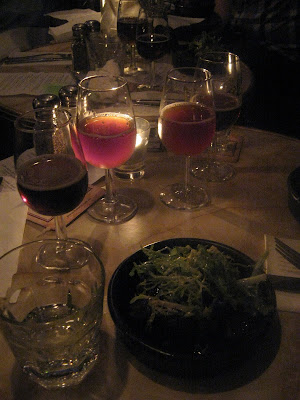 At this stage we had all had “an elegant sufficiency” (as Kirrily’s grandmother would say) but there was still one more beer for those clever enough to have scooped the Trivia prize. And what better way to share the festive spirit than by sitting with friends, new and old, and winding down the night talking beer? With the partners of the Taphouse ‘keepers’ on hand (principals sounds too dicky, owners sounds too commercial) the night just had a magical Christmas family dinner kind of feel to it.

An isn’t that what Christmas – and beer – are all about?

Email ThisBlogThis!Share to TwitterShare to FacebookShare to Pinterest
Labels: Christmas, The Beer Diva, The Local Taphouse

"while the descriptions of the aroma of the Celtic Red were, to say the least, varied".... you're so kind.

While I did work a little on the "if you can't say something nice" principle, I DID still like the beer! I might e-mail Simon at Hargreaves Hill and see if I can get some info on the flavour/aroma profile.

Look, Kev, I know I took the piss with that bit about the Melbourne Cup - and trust me mate, you did look a tool - but stop with the Mandarin! And that word in the fourth line (the one that looks like 'bloke doing splits, tree, bloke doing splits, verandah, tree'? I know what that means and it's NOT NICE! Have a crack at me by all means, but keep it nice. And English.

Cheers
Prof. Pilsner
(Not in Jokenhagen)

Good day !.
might , perhaps curious to know how one can make real money .
There is no need to invest much at first. You may begin to receive yields with as small sum of money as 20-100 dollars.

AimTrust is what you thought of all the time
The firm represents an offshore structure with advanced asset management technologies in production and delivery of pipes for oil and gas.

It is based in Panama with structures everywhere: In USA, Canada, Cyprus.
Do you want to become really rich in short time?
That`s your choice That`s what you desire!

I`m happy and lucky, I started to get income with the help of this company,
and I invite you to do the same. It`s all about how to select a proper companion utilizes your savings in a right way - that`s the AimTrust!.
I make 2G daily, and my first deposit was 1 grand only!
It`s easy to get involved , just click this link http://wavevuqe.freewebsitehosting.com/wakohi.html
and lucky you`re! Let`s take this option together to feel the smell of real money

Dude, you're getting spammed in comments. Pretty funny.... you didn't mention the devil's number in the mandarin....