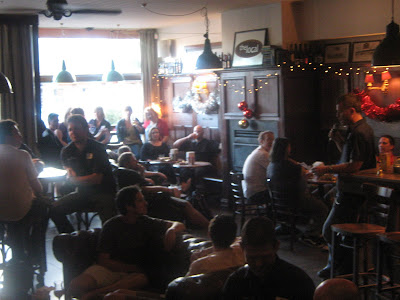 Ale Stars at The Local Taphouse saw in the festive season last night with a joyous celebration of good company, good cheer and plenty of good beer. Seasonal and Christmas Ales was the theme and the room was filled with the now unmistakable ‘air of Ale Star’ – packed to overflowing with spirit and friendship and chatter and hand-shaking and the sudden need to employ the use of a microphone for the host to be heard.

Christmas is, for most, a special time of year and, while Australia is not as blessed as its northern hemisphere neighbours for Festive Ales from many breweries, it is, nonetheless, well served for those prepared to seek. Limited release specials from some of our own craft brewers as well as the availability of overseas offerings means we don’t have to miss out.

A Meantime High Saison kicked off proceedings with its hints of coriander, orange peel and cumin (is that a beer or a curry-starter?) which was well received. Of the fifty or so attendees most were in the affirmative for this one. Perhaps (he said, trying hard to be nice) the next offering was less enthusiastically received. Redoak, from Sydney, has produced its Xmas Cheer for some years now and each batch seems a little ‘removed’ from its predecessor – seasonal variance, or over-tinkering? Not as many hands shot up for this years’ version and the consensus seemed to be that the body was a little thin for the style with the finish a little spiky. 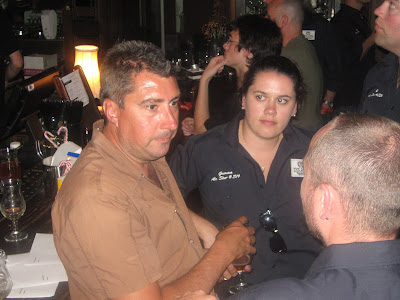 David Golding from Red Hill Brewery was the next ‘gift’ to emerge from Santa’s sack as he showed just how to entertain the crowd with a short but well chosen series of stories to illustrate the thinking behind both the Red hill story and the Christmas Ale in particular. As is often the case, a trip to Belgium years ago was the catalyst for both the establishment of the brewery on Victoria’s Mornington Peninsula as well as the formation of the idea for a seasonal range of beers, of which the Christmas Ale is arguably the star.

The Red Hill Christmas Ale is hopped using the breweries’ own Tettnang and Hallertau hops and the fickle yeast has been ‘tamed’ after four previous attempts made fermentation challenging. A long maturation along with some dry hopping gives this Belgian style seasonal a taut finish after some lovely rich malt and spicy middle bits. Santa wasn’t done yet and we all got to take one home with us to pop under the Christmas tree. 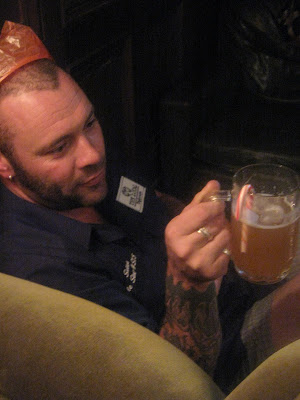 We finished off with a Rogue Santa’s Private Reserve Ale which is based on the amber ale known as St Rogue Red. And that’s about the colour you could expect your nose and cheeks to turn if you emptied too many of these at the Christmas dinner table. A nice finisher after which Dave was kind enough to stay around and chat to the masses. As the first special guest to make a return visit it seemed the Ale Stars still had some questions he didn’t get to answer the first time around.

The festive theme continued with the surprise presentation of a stunningly elegant and beautifully presented pictorial record made to celebrate the Ale Stars first year. A lovely bound first edition that looked very, very professional and didn’t look at all as though Steve and Mark from Cats and myself had cobbled it together from dodgy fuzzy photos, nice clear photos lifted off other peoples’ sites and stuck together with Ale Stars reviews from my blog. Hopefully it will sit proudly on the bar somewhere so that strangers will understand what this whole thing is all about. {Mental note to self – we WILL need to get it laminated}

The night finished with plenty more beery banter around the bar after the announcement of the trivia winners. Some teams did very, very well considering how particularly difficult the questions were but one team did exceptionally well, as it happened. As the team was made up of several previous winners, we, I mean they, were not sure whether to call the team “World Series Super Ultra Team” or “Team – Surely They’ll Disqualify Us Before We Even Start” but it appears that the Christmas spirit won the day and the free beers were duly dispensed. And they were very nice.

A great post, thank you all from the Red Hill Brewery

After Dave left, I was chatting with a few punters and we have a proposal. Dave was explaining how the long lagering period makes the Bohemian Pilsner difficult to make profitable - if we all chip and buy you a couple of new bright beer tanks, would you make the beer all year round?!

Great recap Prof! Would love to see some pics of the book you put together so I can revel in the memories, and the hazy ones too.