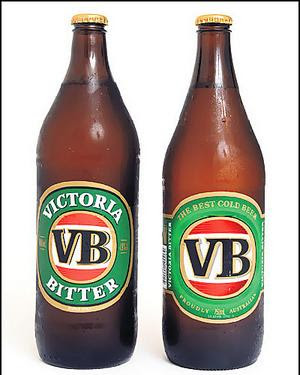 It’s Australia Day and the papers are full of the usual blab about “change the flag”, “the national Anthem stinks”, and “has anybody heard of the bloke they named Australian of the year?”

Here at Beer Blokes I want to talk about much more pressing issues. I’m all very excited to see which Aussie beers score a mention in The Local Taphouse Top 100 craft beer poll this year (announced later today) and even more excited to see if any of my nominations rate in the top 10 and even, even more excited to see if my entry is the one randomly chosen to score a slab of each of the top 5.
But let’s talk about Australia’s favourite beer, VB, for a minute, shall we? What’s that, Prof, I hear you say, ‘have you gone mad or something and forsaken your craft beer roots?’ Well, no, thanks for asking, I’ll explain in a minute.

Up until the last few years (and for about twenty years before that) VB – the artist formerly known as Victoria Bitter – has made up around a quarter of all beer drunk in this wide, brown land. 1 in 4. That’s a fair chunk of a pretty large market and has seen VB become an iconic brand intrinsically linked to the culture through sporting sponsorships and plenty of advertising. When CUB was trying to drive Foster’s Lager back in the early 80’s it made it an international beer while VB became, arguably, Australia’s first truly ‘national brand’.

So, as I wrote late last year, it was amusing to see the furore created by some seemingly minor changes to this much loved brew among its biggest and most loyal fans. ‘Career VB Drinkers’ as they called themselves were falling over each other to have a crack at the Big House for daring to tinker with their cherished amber nectar. Letters to the editor pages were packed with Johnnos, Blueys, Knackers’s and Shags’s willing to renounce their ‘religion’ and threaten to switch brands because CUB had ‘changed the recipe’, ‘watered it down’ and even ‘switched the beer to XXXX’ as one melon-head claimed.

So, with a little research (very, very little) and a quick e-mail to (SOURCE PROTECTED) who was once a major powerbroker for CUB, then its Craft Brewing arm and now a partner in a very nice craft brewing set-up just south of the Queensland border where lots of backpackers and hippies hang out and whose initials are JC and whose name I won’t mention – I got about three full pages of facts and figures and links to the ATO website and tables and graphs and all sorts of shit. So I’m fairly confident that what I write here is accurate and factual and can’t be argued with in any way at all whatsoever so there.

I’ll save some space here and ‘dot-point’ the facts (which (SOURCE PROTECTED) assures me are all in the public domain if you know where to look) relating to VB.
As a quick refresher, ‘Career VB Drinkers’ claimed that VB had changed noticeably due to (a) CUB trying to save money in tax by lowering the ABV of the beer, (b) By brewing it in Queensland and (c) by altering the recipe.

The VB facts.
• VB, along with many national brands are brewed in breweries all around the country and have been since the walls came down on state based brewing in the mid 80’s.

• When CUB drops the ABV by just .01%, it saves tens of millions of dollars in tax allowing it to compete in the beery duopoly that is Australian mainstream brewing.

So, in conclusion, a ‘Career VB Drinker could, for the last twenty years have been drinking VB that was;
• Brewed in Abbotsford, Kent (Sydney), Fortitude Valley (Brisbane), Yatala, Matilda Bay or even Cascade. Although today it is only brewed at Abbotsford and Yatala.

• May have had any of about ten slightly different labels


I’ll leave it here for now so that you can digest all these facts and figures. I’m off to have a beer (not a VB) and you might want to do the same.
I will post a follow up with the various reasons for the changes that CUB has introduced and also to look at the various theories regarding why they have done it and what the future might hold. Also, as promised, I have some VBs in the fridge waiting for the lab experiment to see if I can detect any difference in taste.

Thanks Warm Beer,
Yes, I did have an attack of 'misplaced decimal point' due to the fact that I ws concentrating SOOOOO hard on getting all the details correct - plus, I'm not really very good at maths at the best of times!
Thanks for the tip,