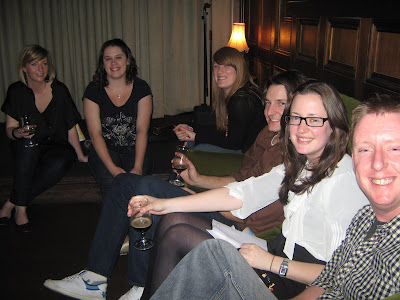 A celebration of beer and of beer people kicked off well before the advertised time last Tuesday and, by all sketchy reports, was still going strong well after the advertised finishing time!

Ale Stars at the Local Taphouse St Kilda had its first birthday and kicked up its heels in style with 7 beers, plenty of pizza and prizes and plenty of beery fun. A new record of 52 drinkers filled the bar downstairs – a scene far removed from the humble origins of the event where a dozen tentative but brave souls sat upstairs wondering if this thing would take off. You couldn’t wipe the smiles from the faces of Ale Stars proud ‘parents’, Steve, Guy and Shandy. 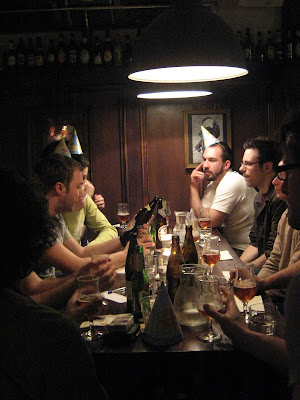 >
To the beers. A ‘Best Of’ – of sorts – seven beers chosen from eleven previous meetings of four or five examples each, chosen by the Ale Star Czar, Shandy, to represent the most popularly received beers rather than just his seven favourites. In truth, I think he may have had a leaning towards some of the beers most likely to be found in his own fridge!

Each beer was introduced by Shandy with a ‘Who Am I?’ introduction giving hints as to its identity. The first person to call out their own name and provide the correct answer won a prize. Unfortunately, I was stricken with a nasty dry cough and had to exclude myself from the competition. In something of an unrelated coincidence, three others on our table were fortunate enough to come up with some wins – in many cases after only one clue! {sings; “I get knocked down, but I get up again, you’re never gonna keep me down ...”}

We led off with Pilsner Urquell, closely followed by Weihenstephaner Heffeweissbier and two finer beers it would be hard to find. Crisp, clean and refreshing but in very different ways, these beers could easily be representative of the whole Ale Stars feel – a broad range of people, from all over and with different beer tastes and experiences, but all drawn together by the event. That’s a bit esoteric isn’t it? I promise I won’t use big words like that again. Which reminds me, does anyone know who has hidden the tech-foul bell?

Timothy Taylor Landlord Pale Ale was opened next and this one was generally well received, as it was the first time around. It was particularly good to see Shandy get all gooey-eyed over his favourite tipple as if it were his high school sweetheart. Perhaps it was? Samuel Smith was probably not his high school sweetheart, but his Taddy Porter was well received as a nice counterpoint to the clean and crisp beers we had had til now.

The only beer out of a total of around fifty that Ale Stars has showcased that has really divided opinion has been Schelkerla smoke beer. We had the Marzen again this time around and, again, it drew the most conversation. Surprisingly, it seemed to have gained a few extra supporters this time. as something of a palate cleanser, we were served the very delicious Saison Dupont, a very fine representative of the Farmhouse style. Slighty sour, with sweet follow up notes and a dry refreshing finish, this one put some space between the smoky and the final beer, a Red Hill Imperial Stout. 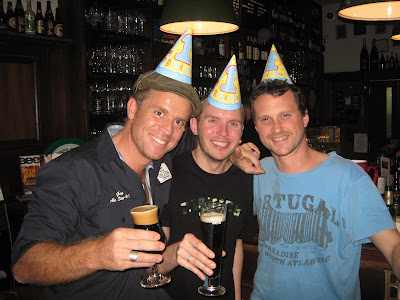 But enough about the beers. This is a good chance to thank the Ale Stars creators and driving force, the blokes who run the joint, whose time and effort go into making sure these nights are what they are and whose passion for good beer makes them such a gosh-darn great night out. So, to Steve and Guy, to Justin and James and Sean and all he staff at The Taphouse, a huge thank you. And to Shandy, the at times indecipherable but always affable host who keeps the thing running along the tracks – even if sometimes no one is really quite sure where the tracks are heading! Well done, Happy Birthday and here’s cheers to the next twelve instalments.

Special mention to Salt & Pepper, AKA ex Taphouse staffer Brendan and Steve and Mark from Cats Arse Art who, despite managing to concentrate so well on the beers that they regularly bring up the rear of the field in the trivia quiz, managed to ace it this time around. For those keeping score, The Prof – and his team, it’s not about me – managed a very creditable third. Second if you don’t count the staff. And that we all reckon Salt & Pepper cheated.
Posted by Beer Blokes at 12:41

I always thought it was more "salt n pepa" like the girl band...

Great night, didn't get a chance for a proper chat Prof but will be back for my lap of honour in November.

I'd also like to add my massive thanks to Steve Guy Shandy & Justin for running such a fun and educational night, a massive highlight of my month.

Will miss my beloved ale stars!!

Great wrap up Prof! What a great night it was although it did get a little hazy for me towards the end..

Thanks for your continued support (and reports!).. I think we're on to a good thing here. I can almost the 20th BD party!!

Thanks Briony for the nice comment.. See you in Nov!!

Could you email me the high res photos you took so I can add them to our Flickr site? (or you could upload them yourself if I give you the login details).

Good lord, aren't I the rosy cheeked ale drinker. The reason I'm so giddy looking is that Guy has just spent the last 2 minutes digging me in the guts and grabbing at my beer handles. I thought I'd grown out of beig ticklish but no.

What a top night. It would've been great to sit at home and sample all those beers but sharing with people so genuine, friendly and interested is just a joy. What a wonderful thing we've got in that room once a month. I hope everyone has as much fun as I do.

The Ale Stars will also miss you smily face around on a regular basis and on their behalf I say, best of luck with your future with your wee Scottish beau. See you in November.

Phoor-Toors have been delivered personally by hand. This is because (A) I was out at Olympic Park for the Storm game and therefore in the area (sort of) and (B) I was at Olympic Park for the Storm game - they serve Boags Draught in cans so I needed sme 'antidote'. A Murray's Nirvana Pale Ale and a 5IBC Shark Oil IPA did the trick. Sorry I missed you. Hope the photos are OK.

You look rosy cheeked and giddy as a schoolgirl because you are on pint number 14. Plus you had also enjoyed a Timothy Taylor Landlord which always gives you that "Just had a sneaky good'un Afterglow"!

I do agree, though. This thing has grown legs, got a soul of its own and has created a fine little atmosphere. But then again, good beer people will do that.