People who really need a beer 03 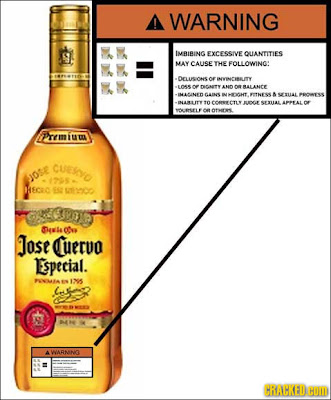 This member of the club whose motto is “Let’s just not let anybody do anything ever and then no-one gets hurt” has featured before in posts on people who need a beer and he makes his return on a similar subject. And this time he’s brought some friends along.

Todd Harper is CEO of VicHealth and I just wish that he was President of the Whole Wide World because his ideas are so simple and so effective that the world’s troubles would dry up tomorrow if he was in charge. Last time around he was calling for blanket bans and lock-outs in pubs and nightclubs and warning labels on beers. I laughed then, I laugh now.

Todd apparently conducted a survey where he rang 1500 people and found out that almost NINE OUT OF TEN wanted cigarette style warning labels on their beer, wine and spirits. Pictures of corpses and bloodied faces and women with breast cancer and sick babies – that sort of thing. I don’t know why, either. We all know the message from the QUIT campaign and the accompanying scientific evidence that ‘every cigarette is doing you harm’, but that is not the case for beer or wine or spirits. Done sensibly in moderation, drinking can be beneficial to your health – mental as well as physical.

I don’t even want to think about how much of our tax cash was wasted by this mob yet again but I can guess by some of the other findings that it wouldn’t have been difficult to find something better to spend it on.

“9 out of 10 wanted warnings that exceeding guidelines may be harmful.”
Those who would take notice already know this. It’s the dickheads who don’t and won’t.

“There is demand {no evidence given} for warnings catering for pregnant women and young people.”
See above.

“¾ support nutritional information and a list of ingredients.”
WHAT?! Here, let me help you – malt, hops water and yeast. Grapes, water and yeast. OK, you’ve got me on RTDs – I got no idea what’s in them.

“Most drinkers want to know what type of alcohol is used in pre-mixed drinks.”
Most RTD drinkers must be stoopid. If it says Jim Beam – that’s what’s in it. If it says ‘bourbon’ then it’s rubbing alcohol with bourbon flavouring. OK?

“There is demand {no evidence given} for a standardised display on the number of standard drinks in containers.”
See post on this from Wednesday. It already exists, and you stupid do-gooders don’t like the way the TAC simplifies it. Make up your minds.

The story concludes with a quote from Prof. Robin Room of the Turning Point Alcohol and Drug Centre in Melbourne who says; “Alcohol affects others adversely, it is not only the effect on the drinker we are talking about.” No Poindexter, alcohol has no legs, no intent, no free will and no grasp of consequences, niether is it inherently good nor evil. It’s dickheads you are talking about – and they don’t, won’t or can’t read your warnings, no matter how you spell them.