I don’t get many Wednesday nights off work, so when I do I want to make the most of it. And ‘the most of it’ turned out to be a visit to the Mountain Goat Brewery in Richmond – on a bit of a whim and a bit of a mission.

After sharing the Ale Stars floor with Dave on the night we did Belgian Blonds (*insert boyish snigger here*) I promised the Head Goat I would pay a visit to get some more info for a post I have been preparing for a while now. It was also a good excuse to have a nice beer.

Now, apart from the ability to consistently produce some damn fine ales, the Goat Guys are also known around the traps as folk who are prepared to have a bit of fun along the way. Traditional brewing methods? Check. Best available natural ingredients? Check. Naming your bottling machine ‘Maxine’ and petting her during operations so that she doesn’t chuck a wobbly? Check.

‘Maxine’ – whose name comes from a witty extension of the brand name, Framax – does work better with a kind word and gentle pat according to Dave and who am I to argue with that? And, apart from their beloved and valued two-legged staff, other ‘members of the Goat family have names. And the one I met on Wednesday was Randy. Or Randle Handle, to his friends. Randy may appear, to the uninitiated, as little more than a large glass tube at the end of the bar but he is far more than that. 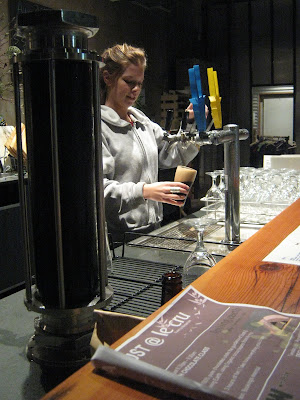 Built for them by Richard Watkins of the Wig & Pen in the image of his own creation (known as The Modus Hoperandus) it sits in the beer line between the keg and the font. The beer is drawn from the keg, through Randy, then out and into the temprites (to chill the beer) before coming out at the tap and into your glass. The big deal is this – you can fill the glass tube section of Randy with a ‘flavour component’, like fresh hop flowers, to give the beer a last second kick of fresh aroma and taste. How cool is THAT?!?

What the Goat Guys have got right now is Randy stuffed full of a Coffee blend specially selected from 5 beans sourced from around the equatorial belt. I don’t know a lot about coffee beans and I’m just guessing it’s beans from 5 different places, not just 5 beans, given that I could smell the coffee as Meg was expertly pouring a beer for me. The Mountain Goat Surefoot Stout is running through the beans and the explosion of flavour, the punch of the aroma and the inexplicable and uninterpretable sensation that it gives you is an experience that you just have to experience yourself to know what I mean. If you know what I mean? 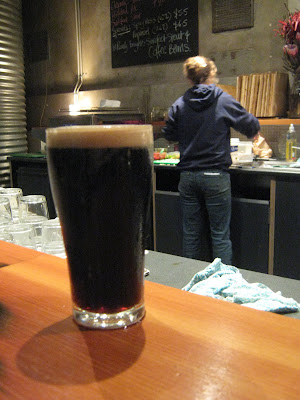 And here’s where the Beer Karma comes in. I’m sitting at the bar with Tom who looks after the sales side of things at Mountain Goat and he introduces me to his drinking mate. “This is Ben, “ “G’Day Ben – what do you do?” “I put the coffee blend together.” “This coffee blend that I am actually enjoying right now, this very minute as we very speak?” “Yes.”

Now where else could something like that collision of coincidences occur? That is what a wanker might call ‘serendipity’ – a beer drinker would just describe it as ‘sweet’. Good, handcrafted real beer, brewed with love, handled with care and then filtered through choice coffee beans, and drunk by me while sitting between the guy who brewed it and the guy who enhanced it ... that’s Beer Karma.