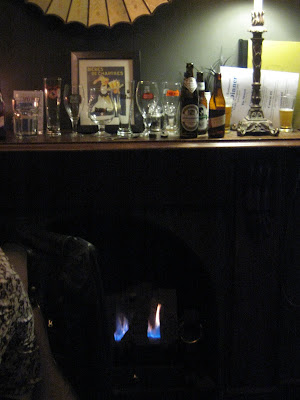 The weather did its best to make sure the warming winter brews were just the thing to please the guests at last nights Beer Dinner at The Courthouse Restaurant. A chilly breeze outside and a log fire inside made for a night suited to the chosen beers.

Chef Tim O’Brien planned the four food courses which matched beautifully to the beers. A nice easy starter as the guests arrived was found in the form of a Barons Pale Ale, a nice easy drinking Australian style pale ale which served as a good opener to the line up to follow.

Fresh mussels cooked in beer with sides of fat chips and mayonnaise is something you would expect to match up with a Belgian witbier and the guests were pleasantly surprised to find that a Little Creatures Pale Ale was a bit different but very suitable. The punch of citrus freshness in this hop driven ale worked perfectly alongside the clean freshness of the shellfish without being overpowering.

The second course was a magnificent rolled pork belly stuffed with Calvados soaked prunes which was just waiting for a beer with enough backbone to keep up with the big flavours but also had something to drive through the richness. A Pepperjack Ale from the Barossa was just the thing to achieve both aims. Brewed with 5% Pepperjack shiraz it had that fruity warmth of a quality ae but with a slightly acidic backnote provided by the wine. An interesting meeting of beer and wine. 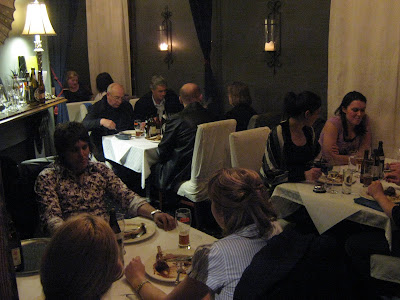 The main course of long, slow cooked lamb shanks was paired with a Weihenstephaner Hefeweissbier Dunkel allowing the rich flavours of the lamb to meet with the depth of flavour in the beer while the citrus lightness in the wheat gave a nice contrast and balance.

Samuel Smith’s Taddy Porter completed the night alongside a rich chocolate brownie with a dark chocolate Kahlua sauce. The nuttiness and toffee notes in the porter were just what the brownie needed.

Timo and I are already hatching plans for the next beer dinner and, with the onset of Spring and the warming weather there are plenty of recipes waiting to find a perfect beer partner.

Great post. I'm sweltering in the height of our Missouri summer, but the pics and description seemed to give me the urge to get a blanket to take the chill off.

Those were some interesting beers. Your post has inspired me to start a series of posts called "The Beer Chaser Report" where I track down information on interesting beers that I discover while reading blogs.

This is scary! I am reading 'The Lost Continent' by Bill Bryson at the moment. Last night I was reading the chapter where he crosses the Mississippi into Missouri, then I awake this morning to find your comment! I've said it many times before - Beer really does bring people together.