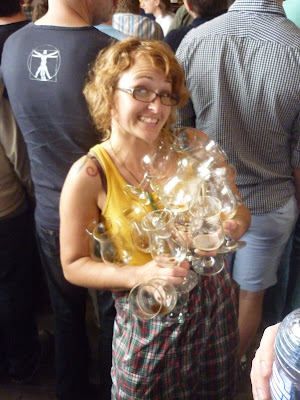 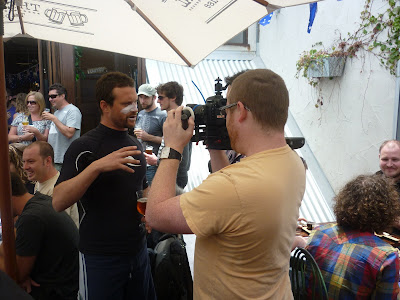 You know how Australians judge a ‘good’ Chinese restaurant by the number of ‘authentic’ Chinese diners within? Well, if the same value judgement can be made with respect to a specialist beer venue and brewers, then The Local Taphouse might just be the best bar in the whole wide, wide, wide world ever.

Already well established in the collective craft beer consciousness as Australia’s premier beer venue for its day-to-day support of the industry it pops up at regular intervals with one day events that serve to further establish their beer street-cred and give the punters something a bit special.

The seasonal mini-Beer Festivals, known as SpecTAPulars have been running for the three years that the St Kilda Taphouse has been open and more recently in Darlinghurst as well. The venues taps are given over to up to twenty different beers all roped together in a common theme like Oktoberfest or Canadian or American beers, or along comparative lines such as the ANZAC Day Aus vs NZ SpecTAPular. A gold coin donation is usually all you need to join the fun with all door proceeds going to a related or current charity.

The 11th SpecTAPular, or SpecTAPular XI, was different. Re-titled GABS (Great Australian Beer SpecTAPular) it departed from the regular format and took things to a whole new level. Approaching craft brewers from around the country, Taphouse brains trust, Steve Jeffares and Guy Greenstone gathered 19 one-off beers (18 in Sydney) that ranged from fruit flavoured and hop-driven to barrel aged and chilli-laced.

What they all had in common was that they were getting their first public exposure. Never before had these beers been unleashed upon an adoring and expectant crowd. And they were indeed adoring as were they expectant if the lines of anxious punters waiting to get in at both venues and throughout the day and evening were an indication. Such was the level of excitement that, as the crowd inside grew and grew it was necessary to restrict movement between levels creating something of a VIP section aura at St Kilda.

In fact, it was just as lively and vibrant downstairs as it was upstairs. I mean, just because all the brewers and the ‘cool kids’ just happened to be upstairs and we did get Ange as Blinky Bill and then later after a few (!) quiet ales brewer Sam Fuss donned the skinned koala head.

And OK we did all enjoy the antics of The Wobbly Thong and The Crafty Pint gathering video footage which will either form part of a magnificent on-line production or allow them to receive free beer from several brewers forever by NOT allowing the footage to see the light of day. But, really apart from that and the other Super-happy-terrific Funshow that was going on upstairs – you didn’t miss anything. 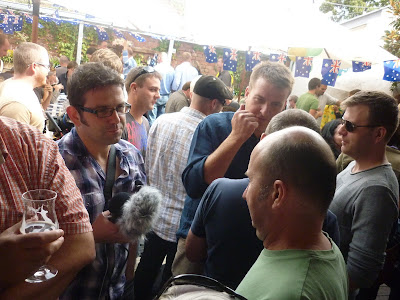 And while it’s fair to say that GABS attracted many of the brewing community ‘Glitterati’ as well as other specialist beer venue and retail staff and various other notables it also catered very well to the average punter. It was pleasing to see so many young and old, sharing experiences and asking opinions and talking in the queues and swapping tasting notes as the day went on.

The staff were all at their patient and friendly best as wave after wave after wave of eager drinkers fronted the bars and carried away paddles laden with samples before returning again and again to buy larger sizes of their favourites. The Taphouse guys and girls are known for their welcoming manner and for helping sometimes baffled patrons to choose a beer to suit but on this day they took their craft to another level. Never a cross word or an exasperated sigh between them and always smiling. But seriously, if Ange is coming up behind you with arms full of empty glasses or plates full of food; don’t let the koala outfit fool you – give her a clear path and quick! 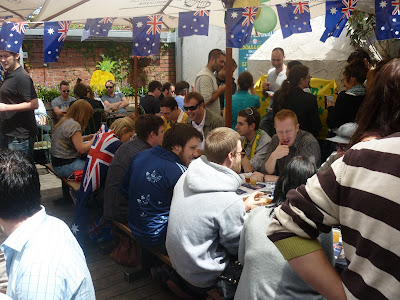 If you want to read about all the different beers and the crowd favourites and all that stuff, I’ll chuck in a link to The Crafty Pint’s wrap of the day at the end. If you couldn’t get there it is unlikely that you’ll find many of the beers around after each keg drained – some will become seasonal or maybe even permanent brews at a later stage but for now, it’s all about the concept of GABS.

So where to from here? Events like GABS shows us that craft beer in this country has a loyal and increasing following willing to try something new and different. When it is presented well with the support of the industry in the right venue by the right people, the crowds will come.

Steve and Guy were both thrilled at the numbers who turned out at each venue and are confident that, not only does the thing have a strong future but it also may need a bigger home if the exercise is to be repeated. No one, least of all the owners want to have punters waiting too long to get their beers from the bar and plans are already written to take the event off-site to a larger venue so that more are able to attend and more beers and brewers can showcase their talents.

If I could make a suggestion – anywhere near a train station would be nice.

Email ThisBlogThis!Share to TwitterShare to FacebookShare to Pinterest
Labels: GABS, The Local Taphouse

What? No mention of Jason?