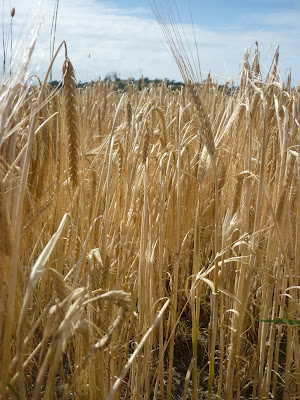 If you’ve ever visited a brewery that opens to the public you probably have an underlying sense that while these places are under the stewardship of people who care about the product and the procedure they are essentially a manufacturing concern.

This, of course, is necessary as gleaming stainless steel and spotless well drained concrete floors ensure that the beer that comes out at the other end has been kept separate from all of those microbial nasties that would seek to destroy our favourite brews. But you’d be wrong to think that a brewery is just a beer factory.

There is still a strong link between the fields and the foaming pot. 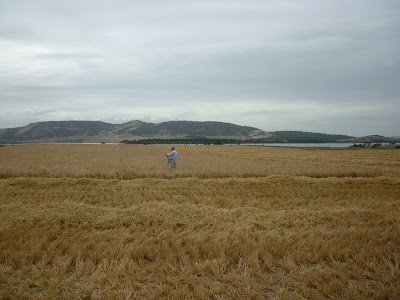 And this link is no stronger than in the relationship that Cascade Brewing Company has with its raw ingredients. In days of old it was common for a brewery to have its own malting house where the raw barley would come to be washed and dried and kilned and bagged in big hessian sacks before travelling a short trip to the Brewhouse. Today, in Australia, Cascade is the only brewery with a maltings facility.

But the relationship goes even further than that. When you see this relationship at work you are forced to realise that the beer in your glass is the result of more than mere mechanical processes and chemical reactions between mysterious physical properties. There are real human relationships evolving to ensure that your schooner of ale has more in it than the sum of its ingredients.

You could be forgiven for thinking that an invitation to visit to a farm to see barley growing would elicit the same response as that of a grade five lad to the prospect of a day at a cannery but when the visit is directly linked to one of Australia’s favourite and arguably its oldest brewery then a whole different complexion colours the prospect. You may just look at your next beer in a different light, too.

It’s difficult to convey the feeling of wandering through swaying carpets of grain where the only sound is that of the breeze and the distant call of birds and thinking that one day, with Mother Nature’s blessing, this will be beer. And here you stand within a group of seven and yet not a word is spoken until all have time to acclimatise the senses and process the feeling. It is actually just a little bit awe-inspiring.

And it’s more than even this raw agricultural connection that brings some provenance to the Cascade brews. With around 60 different farmers contracted to grow barley for the brewery there is a real and tangible community element to the story. You can imagine the supplier/customer relationships are as real and as honest now as they would have been when almost all commerce and trade were conducted this way.

The grain is delivered straight to the brewery – no far-off third party processing here – in big trucks where it travels through systems that are little changed from the days when a horse and cart would have done the same. It is steeped and kilned and stored on site until it makes its way to the Brewhouse to become the beer that has been a Tasmanian staple since the early 1800s and a favourite on the mainland since Cascade Premium Lager landed in 1985 to challenge the reign of the prevailing brews. 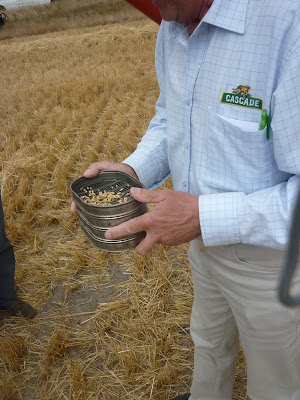 This link to the land and direct connection to the ingredients is at the heart of what Cascade Brewing Company could be all about. In an age where marketing and back stories (real, wished-for and outright imagined) are deemed almost as important as the liquid in the keg, it is odd to think that this facet of the Cascade product is relatively unknown. As more and more small brewers have brought their craft to the market, Cascade has perhaps been left behind by the average drinker and in a kind of limbo between its ‘premium lagers’ and perceived cheaper mass-produced brands.

Cascade produces a range of beers that sits firmly within what their local market demands and what the wider audience likes to see – sessionable, easy drinking and not-too-challenging beers for the everyday occasion. Perhaps today we expect too much of our breweries, that all our beer must have a ‘catch’ or an ‘edge’ or a ‘gimmick’ that we can forget the simple joys of a well made and reasonably priced beer that delivers just what it promises. Even if it doesn’t seem to promise much.

That Cascade Brewing Company also produces First Harvest Ale as a limited release annually should give them a certain deal of craft credibility with those who expect more from their preferred brewers. That many drinkers today enjoy Galaxy hopped beers is due to the ‘launching’ of this variety in the 2007 First Harvest. 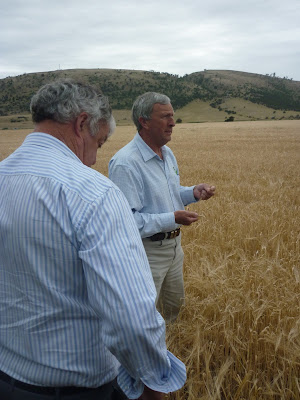 A revamped packaging across the range and a focus shift from the native Tasmanian Tiger to the heritage and history of the brewery buildings themselves in the labelling and advertising, along with a very slick, but honest, development of the company website might just remind drinkers that it’s not necessarily a bad thing to produce standard representations of beer styles in your range, that it’s OK to have a portfolio of beers that doesn’t include high alcohol hop bombs or barrel-aged bangers – as long as you do what you do well.

Maybe it was the pleasant morning spent strolling through fields and communing with nature and leaving the big smoke behind or maybe it was the company of the Head Brewer and the Malting’s Manager, but the beers shared that night just seemed to taste fresher and better than I thought I would remember them to be.

And, put simply, that was not bad at all.

Excellent post, great to see the connect between the paddock and the pint. My parrents grow wheat and barley, and although I dont malt it I always enjoy using it as an ingredient in my beer. Just feels right. Love their first harvest ale, even though it isnt Xtreem.

As for Cascade Premium Lager, if only we could get them to stop putting it in a green bottle! (I cant stand skunky beers)

Thanks for the kind words lads, I just thought it was an element of the Cascade 'business' that needed some light shone on it. Have heard a bit said against Cacscade as part of the Foster's Family and thoght it apt to point out that sometimes it doesn't matter who signs off the pay cheques but what comes out the doors that matters most.

They've got a great website too at www.cascadebrewery.com.au
Check it out.