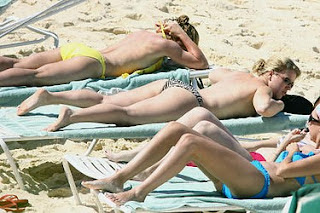 Is there a better series of words in the whole English language? No, seriously. Read the title again. Go on, I’ll wait here. Holidays and beer. HOLIDAYS AND BEER. Mmmm, holidays. Mmmm, beer. Just the very thought of the two – holiday, and all that it embodies- and beer, and all the beer you can ‘embody’ while on holiday.
The fact that you don’t have the same 9-to-5 responsibilities that you have at work or with family, and the fact that you are not as answerable to anyone like you are when you are ‘on the clock’ is like a bone to a starving dog, a Papal Blessing to a devout Catholic or the promise of ten minutes of fame to an Australian Idol hopeful. Or, like a beer to a thirsty man.
This is the story of two thirsty men. And their holiday. And some beer.
Around this time last year the Beer Blokes joined forces and families for their annual holidays and spent a week and a half at Alexandra Headland on the Sunshine Coast in the sunny state of Queensland. This year it was decided that, as the kids had successfully completed the previous experience without killing each other or driving the parents too insane, that we would do it all again this year. And so, heading a little further north to Noosa the adventure continued and a new chapter written. And, of course, the drinking beer bit has provided some more material for an entertaining and informative Beer Blokes post. 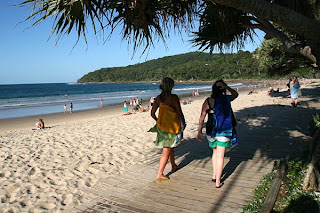 Travelling separately due to work commitments, the Blokes, their Blokettes and total of three mini blokettes and one mini bloke met up on a fine but overcast Monday afternoon in adjoining apartments on the river at Noosaville. Having insured that the kids were safely out of the car, Dr. Lager and I headed off into ‘town’ with some haste to seek out sustenance. We found it in the 24 x 375ml form of Dr. Lagers’ choice of ‘stock’ beers, Toohey’s Extra Dry. The basic plan was to hold slab stock of a standard, ‘everybody-can-drink-it-anytime’ kind of mainstream lager which would be complimented – augmented, if you like – by six packs and singles of testers and tasters and local specialties.
The great thing about holiday beers is that you that; a) you don’t have to worry about driving home – you can wander off the neighbours back porch and onto your own in two to seven staggered steps and; b) see a). Oh, and of course because you don’t have to wait til’ dinner to drink them. So sitting out on the deck watching the ducks and the boats go by you can have a Blonde with breakfast, a lager with your lunch, a Dortmunder with your dinner, and even an ale with afters. And when your afters are a bucket of Tin Can Bay prawns and three different dippin’ sauces, well, the ale goes down noice.
And the Extra Dry went down noice, too. So the next day we bought a new slab. Nah, nah, just kiddin’. It took a bit longer than that. A bit. We then went for the Profs choice - Boag’s Draught and it, too, went down a treat. This slab was followed by another Dr. Lager selection; Cascade Premium. Again, nice. Good easy drinking beers that match well with holiday food, holiday activities and late night twenty-twenty cricket telecasts. And you can drink a few when you’re responsibility receptors are set in holiday mode and still wake up pretty fresh in the morning. Which is extra special if your kids get up on holidays when the sun does. In Queensland, this is between 4.30 and 5.00am during October. Not noice.
The two families enjoy a nice meal rather than the standard take away or barbecued-to-death sausage and chop, so the supplementary beers had to have enough personality and flavour to carry their weight alongside things like Moroccan lamb or spicy quesadillas, seasoned chicken or salt and pepper calamari and Indonesian spiced rice. Amply handling this role with beery aplomb were Hansa Pils and Weihenstephaner Pilsner and Original from Germany, Boag’s Wizard Smith Ale and Eumundi Lager, brewed locally. And the odd bod of the brew bunch was the new, limited offering from Foster’s, Crown Gold. This is a piggyback marketing release where the brewer has taken an existing and, in this case, bewilderingly popular brew, and produced a mid strength version.
They did this last year with VB mid strength and previously they had a good deal of success with VB Original Ale but to take their flagship ‘premium’ beer and dumb it down seems a little puzzling. The Dr and I both looked at each other quizzically on the first taste and the consensus was a resounding ‘why bother?’ Crown holds an inexplicable place in many drinkers minds as a dinner table beer or a reward from the boss to the minions at the Christmas party but it is, in reality, Foster’s Lager with a further fermentation and gold highlights on the label. As a mid strength it merely weakens its already flimsy and ethereal foundations. Still, a beer is a beer is a beer.
We were a little surprised by the sameness of the fare on offer around the place – all the outlets we visited (and we visited as many as we could ) had pretty much identical stock lists and many seemed to devote more space to RTD’s and girly fizz than to anything more than a few shelves of XXXX and Toohey’s New, VB and Carlton Draught and even Dan Murphy’s seemed a little light on for craft brews and specials. I don’t know if this is another of those ‘chicken/egg’ things. Do the suppliers stock limited range because holiday makers only buy mainstream local lager, or do holiday makers buy that because the suppliers don’t stock anything more interesting or unusual?
At the end of the day, the best beer is the one in your hand and even better is the beer shared between friends over a meal. The Beer Blokes certainly tipped the scales in favour of the latter and plans are already afoot for next years Beer Bloke Holiday and Lager Adventure.
Prof. Pilsner

Dear Prof Pilsener,
I need help. I am employed in a job that requires me to be 0.00 BAC. Is there any sure way of having, say, a dozen beers the night before and not registering the following day? I need the job to afford the beer.

Thanks, Frank
You certainly pose a tricky dilema. In all walks of life there are those who must perform their allocated tasks with nary a sniff of alcohol to power them along - and for this, the general public is thankful.

For example, the Courts may take a hard line on graffiti vandals if they were a little tanked. Hold on, that's not a good example. Ah ... teachers at Universities may refuse to indoctrinate students in radical Left Socialist Commo Pinko politics. Hmm. OK. what about tram drivers? If they were on the booze the night before, trams might just go crashing into the backs of one another!

The answer is simple enough. Drink heaps, ring in sick and say that you are doing a public service.

Agreed.
As the Prof quite rightly points out, it is in the community's best interest that you call in sick in such a situation.

I kind of hoped that the Professor could outline that this is society's fault that you are like this and, in an ideal communist world, we'd all be equal and therefore anyone could be coerced, er, I mean, could volunteer to drive the tram.

Thanks Rod (Geez we don't have many readers but strike me purple we attract some famous ones!)

If the pickle driving the Connex train this week with the seat on fire who didn't know how to operate the fire extinguisher is an example of the quality of public transport drivers maybe we all should offer to drive our own train or tram home.

It would certainly not harm the careers of any taxi drivers who couldn't navigate their way out of the car park without your help if we all decided to sit them in the back seat and take the wheel.