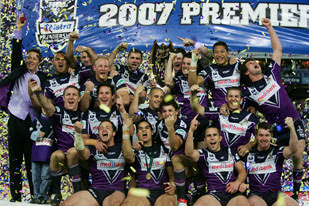 A Sporting Journey as seen through a glass of Beer.

As many readers will be aware, Professor Pilsner is something of a sports fan as well as a drinker and admirer of beer so I thought it as good an opportunity as ever to combine the two in the interests of further educating the non - beer world. What follows is a diary of sorts which tells the tale of travel, beer and triumph.

On Saturday September 23 the Melbourne Storm Rugby League club defeated the Parramatta Eels 26 - 10 a momentous occasion for all League followers in Victoria and for one in particular. The win under the roof at the Docklands Stadium ( Telstra doesn’t pay me a cent to advertise their name ) meant that, for the second consecutive year the Storm would play out a contest for the sports’ ultimate prize. For its’ supporters, this meant an opportunity to follow the boys north and share in the elation or the misery and to perhaps enjoy a few of the local liquid offerings. After all, I can have a few extras if I don’t have to fly the plane home, can’t I?

Having offloaded the car at some time before daylight on the Sunday of the game - for the non-leaguers, the NRL holds its Grand Final at night now - my thoughts turned immediately to the prospects of the weekend ahead. Beer. Mmm, beer. What brews would be offered? Where could I go and in what sort of atmosphere would I be drinking them in? Would there be a chance to get some Sydney beer culture experience squeezed in before heading out to the ground?

And then to the game. The what and the where of beer would be pretty straightforward. A couple of hundred little bars and tents dotted at intervals along the inner concourse of the Olympic Stadium (they still haven’t offered to pay me anything to call it Telstra) selling Toohey’s New and a Mid Strength or light, maybe a Heineken. The question would be how long the wait and would the spotty 18 year old girl from Spotless or whoever does the catering there know how to pour a beer into a plastic cup without making either ice cream or a scale model of the Nevada flatlands? And would she know the difference between a cold beer and a not?

Virgin Blue sells Vbs for I think $5 on their flights and that’s not bad considering what you’d pay for one in nightclub or bar. But, as I have lamented before, why bother drinking VB when you go out if there is anything else on offer? A good example of what it is, but it’s not much really and it’s so readily available that there is little reason to drink it outside the home. If you have to. Crownies were a dollar more and in the words of Forrest Gump; “That’s orl ah gut ta say ‘bout that.”

Having a train at the airport in Sydney is great because it takes a lot of the guesswork out of leaving the airport. Which is even greater if you did have some Vbs for $5 on the plane. Mr Brumby, take note. Get a train built to our airport. And don’t think of calling it Brumby Station or Expensive Street Station. Or putting tolls on it. The guys I was meeting up with had come up a day earlier and I planned to meet them out at the hotel in Parramatta so it was change trains and off again. No beer to be found AT ALL either on the train or at the station. Some work to do here, Morris Ieamma. Iannemma. Enema Iamananna. Mr. Premier. Lunch at Westfield - that’s a big day out for the good folk of Parramatta. For those in Melbourne, think Frankston with not quite as much charm. Standard beer offerings only in the Woolies liquor department.

Back to the hotel. There is only so much excitement you can handle at Westfield before feeling a little giddy. The boys had some leftover Toohey’s Extra Dry and a handful of Crownies so they were put away while we watched the pre game shows and the junior grade Grand Final. Just like the players, the supporters need to prepare for the Big Show. Back on the train at three. No beer available still. Get to the ground. Lots of beer available. And here is where the AFL could take a tip from our northern neighbours.

Outside the ground there are two huge drinking areas set up for fans to meet and wind up and drink a beer. Both are fenced in and secured and have bands playing for free and reasonably priced beer - welcome to the collection Hahn Premium - and it means that you don’t have to commit to sitting inside in the sun watching the grass grow.

The AFL only provides corporately expensive and exclusive entertainment for its showpiece so that if you managed to get a ticket you have to sit through marching banner waving kids and Australian Idols squealing Waltzing Matilda. Or a cardboard Batmobile or the Goal Umpire Chorale or giant novelty inflatable footballers. This year we were treated to an upside down hanging lady who grabbed the cup and then couldn’t find her way down to the podium she was supposed to place it on. Mike Fitzpatrick relived his glory days by taking an easy receive and potting a cherry. Pass the beer, please.

The NRL fought back well by inflicting Nollsie on us but took the lead with the arrival of the Blackhawk helicopter which burned a huge chunk of the middle of the ground and the skydivers who bettered last years effort by landing three and only losing two. That’s one better than last year. But this year none landed on the stadium roof so that’s a good thing.

And on to the game. To their credit, the beers were cold, the staff efficient and friendly and the atmosphere was electric. The beers went down well and the game was a cracker. Sorry, Zak. I would just like to take this opportunity to say Hi to all the Manly supporters who bagged, slagged and in one case ‘flagged’ us before the game. I wasn’t able to catch up with all of you after the game. I was busy. Drinking. And hugging the trophy. And drinking. And, besides, most of you had left long before the game finished. That’s one area we have you beat in the AFL. The supporters stay till the end. Except Melbourne Demons fans. They like to get a headstart on the crowd to get the Range Rover out of the car park quickly. Even long suffering Richmond fans stay on, although, in truth, that’s just so they can rip up their memberships in disgust and berate the players as they walk up the race. That’s the tunnel for you NRL folk.

The after party was a little more unrestrained than at the same time last year and the beer was certainly going down more smoothly. And there was plenty of it. Until it ran out. Drinks with the boys and Molly Meldrum and Micky Roberts and Tiffany Cherry and who knows who else. Everyone was there. Back into the city to finish off the night with a 3am kebab and two Toohey’s New before stacking some zeds and heading back to the airport at 6.30 so we could fly back in time to meet the boys at home. 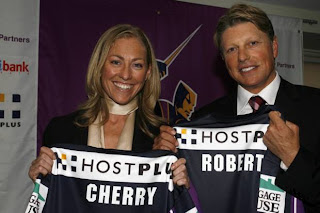 But the next three days of partying and public civic receptions and partying are a whole other story.

Did I mention that there was beer there?