The Taphouse and the Farmhouse

The eagerly awaited fourth instalment of Ale Stars at The Local Taphouse kicked off on what some would describe as a typical Melbourne spring evening. A nice warm afternoon followed by gusty cold winds with scattered periods of ‘pissing down’. Fortunately for us the Farmhouse ales and the company of fellow beer people provided the necessary foil to the weather.

The night was again ably hosted by Shandy whose passion for beer comes across in his introductions to each of the four sampled beers without ever treading on the pretentiousness pedal like wine tossers are often want to do and his descriptions of the beer styles are always informative, entertaining and sometimes requiring of subtitles. Just kidding. He goes all right. I would never speak ill of someone who comes from a country where the men wear dresses and the national sport is fighting in the street.

Our very special guest for the Farmhouse Ale session was Ben Kraus from Bridge Road Brewers in Beechworth. This brewery has a name that can be used to test the level of drunkedness of its patrons. Say it four times quickly and you can have another beer. And that is an art worth mastering as this guy crafts some of the best beer that the Professor has ever downed. And sipped and savoured and skolled as well. More about Ben and his beers later. 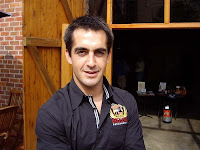 As we were to learn, Farmhouse ales are something of a regional specialty from the France-Belgium border areas of French Flanders and Wallonia. For more interesting geography tidbits use your computers web browser or visit your local library. As for the beers, Farmhouse as a style encompasses Saisons and Biere De Garde. For those playing at home that’s roughly translated as ‘season’ and ‘beer for keeping’. See, there is always something new to learn. As the keeping bit suggests, these beers are ales that are brewed in late Autumn and Winter and then stored for the coming summer. A bit of bottle conditioning and patience and you have a very nice style of beer indeed.

Designed originally to provide sustenance for farm hands and miners the style is characterised by a relatively easy drinking and thirst quenching nature. A generic ‘farmhouse’ character is present in each example of the style but differences can be found in the colour, alcohol level and body and finish of each. Intended as something of a ‘soul-enricher’ for the workers, the beers tend to be spritzy and reasonably citrusy while ensuring that the staff could have a few and still complete the tasks at hand. Shandy’s research suggested that up to five litres a day was a fair ration which also suggests that the historical time frame for the style pre dates both O.H & S legislation and the invention of heavy industrial machinery. One suspects that more than one plough horse was piloted into the dam after lunch. Ben brews his fairly true to style, in that it makes a fine lunch time beer for the workers at his brewery. He doesn’t allow his workers to use horses. I don’t think he has a dam, either.

One of the highlights of these events is the opportunity to discuss every aspect of the beers, the styles, the history and the origins with like minded souls in an environment where the Q&A is casual and chat is never too technical. Although when Steve the Irishman and Shandy the Scot get a bit of passionate beer banter going between them across the room it’s a case of ‘duelling subtitles’ for the rest of us. The thing is, beer people really are the best company – even if you’ve no idea what they’re saying.

It is a rare treat to have someone like Ben to bounce questions off and get a real feel for what it is to dream up, design and then deliver a finely crafted beer and then to sit back and watch your end user enjoying it. Ben managed to fill in some gaps concerning the Farmhouse styles and how he came to add one to Bridge Road’s already impressive portfolio. His Chevalier Saison was the third of the beers we had and all I can do here is seriously suggest that you seek out a bottle or two for yourselves and give it a go. This is one of those rare breeds that actually changed character and personality with each sip and as it warmed. It was agreed by all that it stood up more than admirably against the imported Trois Monts, Silly Saison and Saison Dupont.

There is so much more to report to really do justice to the whole Ale stars concept and I just don’t have room here. From the beers that we share to the people that we meet and the shit that we talk – especially later on as we keep the bar from falling over – it is a great opportunity to enjoy an experience that is so special most people are not even aware that they are missing it. That make sense? Shit, I think I’m turning into Shandy. Just kidding.