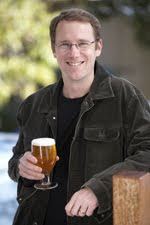 When you’re having a beer.

While enjoying the simple pleasures of Trappist Ales and perhaps a few quiet birthday ales as well, when a new-comer arrived after the official proceedings had concluded. Dr Lager, Chris and I had just been speaking about the kinds of people who turn up to The Local Taphouse after an Ale Stars evening and the kinds of laughs we get, so we were watching this bloke with interest.

He was one of those blokes who ‘kinda-sorta-look-familiar’ but you don’t think you’ve met them before, yet you figure you know them. He was chatting to Guy and Justin next to us when I overheard Guy saying, “Yeah he IS. He’s standing right behind you.”

“G’Day, Prof, I’m Beer Matt,” he says. If only for the fact that I may have been on my fourth birthday drink, you could have knocked me down with beer label. Beer Matt, is Matt Kirkegaard, former editor of Beer & Brewer magazine, beer writer, host of Beer Events extraordinaire and fellow beer blogger – see his feed in my list of ‘Drinking Mates’ on the right hand side of my blog.

We have swapped comments and shared views on each others’ blogs for a while and it was a very nice surprise to meet him as suddenly as I did. Matt was at The Local Taphouse to host a corporate beer dinner upstairs – BEER DINNERS for corporates?? Where were they when I was out in the mud shooting the CEO with paintballs or running the Food & Beverage Manager off the Go-Kart track!?! Nice gig if you can get it! Let me know if you need a ‘sidekick’ next time you’re down in Melbourne, Matt!

There was something very Beer Karma about meeting a fellow beer blogger in person. It just goes to prove that beer really can make the world a smaller place and one in which people with shared interests can connect much more easily than in days of old. Now, settle down, Mrs Lager, that does NOT mean I am about to embrace the evil empire of Twatter. Yet. I just mean it was a strangely warm feeling to have ‘made a friend’ due to the Wide Wide World of Webs and a common passion for good beer. That’s all. Good to meet you, Matt.

And just to clarify an earlier point, the kind of people who usually slide in to The Local Taphouse (late on a school night, remember) and give us a laugh are the ones like Sean served a couple of Ale Stars back. This scraggy bloke, who looked as though he may have been already reasonably ... refreshed ... straddled the bar and surveyed the blackboard next to us.

After Umming and Aaahing for a minute he says, “Um, I’ll just have a .. orrr ... something simple ... how about a .... a .... a .... number 7??” Number seven was something like an Erdinger Dunkelweizen or similar – certainly it was something a million miles away from his ‘usual tipple’. He hands Sean the cash, takes the glass, strides purposefully away from the bar ... straight out the front door and onto the Number 27 tram to Caulfield. Just like that. Funny, funny shit.
Posted by Beer Blokes at 11:01

I'm forever running into people randomly - but running into internet associates who you don't in the first place is bizarre. I need to get to The Local in Darlo and check out what all this ALEstars stuff is about.

Yeah, it was just so unexpected and, coupled with the fact that you are meeting someone you 'know' but have never met ... just a buzz.

It looks as though I won't be able to get up to Sydney for the NRL Grand Final to see the mighty Storm claim another trophy in two weeks, but I am hoping to get up later in the year for a visit to the Darlo Taphouse. I'll let you know when.

Jump onto the Local blog for details of the next Ale Stars night. AG (ex Mountain Goat brewer and now at 5 Islands) is the host and a very good beer bloke. I reckon you'd like it.

Is Tim Thomas still @ 5 Islands? he was a top bloke, loved to have a chat and a beer whilst brewing.

I miss working in Wollongong. The Local isn't far from my new place of employment. I see it in the distance everyday from my car on the way home but have had no chance to call in. My scheduled debut will be on Sat 11th Oct when I will stop in for a few Oktoberfest brews before watching Aus v. Holl in the soccer.

Not sure who the brew team at 5IBC Tim.
I'll be drinking Oktoberfest beers in St Kilda on the same day - maybe I can see if we can hook up a webcam link like Neil Perry has at Rockpool in Sydney and Melbourne! We won't get to meet but we can watch each other drink!

haha, sounds like a laugh. My missus will be in the James Squire joint in Melb at the same time!

Sydney’s iconic landmark, The Australian Hotel will again host its renowned two-day beer bash to celebrate… BEER! The 5th Annual Australian Beer Festival over Saturday 24th & Sunday 25th October from 12 noon to 8pm is back with more beer than ever. This is the Beer Festival to end all Beer Festivals and extending its size to fit in with its burgeoning growth and success as it builds momentum each year.

The Australian, a Heritage Hotel, taking out awards over the years including Best Beer Venue in Australia and Best Heritage Hotel of the year The Australian is world renowned for its patriotic support of Australian beers with more than 120 different beers from the micro to the massive available at the heritage listed pub. The Australian Beer Festival will once again give beer lovers the chance to taste all of these great brews during a weekend celebration of all that makes Aussie beer great.

The Australian Hotel, at the heart of The Rocks and in the shadow of the Sydney Harbour Bridge will provide the perfect backdrop for a unique opportunity for beer lovers to meet the brewers and seminars will be held over the weekend to educate those with a keen thirst for beer knowledge. More than 9000 people are expected to attend the festival and 20,000 litres of beer to be consumed over the two day event, with the Australian Hotel serving up their famed-grub, true blue Aussie pizzas such as Croc, Roo, Emu, matched back with a cleansing ale sampled from the festival - Come on down and put our local brews to the test!

Thanks for the 'Heads Up', Diana

Thank You also for realsing that Beer Blokes is Australia's premier beer blog for those seeking beery enlightenment with over 200 visitors every day. I just made that bit up actually, I don't know which beer blog is Australia's best.

I hope plenty of the 9,000 people who get down for the Beer Festival will mention that they heard about it from Beer Blokes ... word of mouth is such valuable advertising. And, if it's FREE as well ... so much the better.

And, on a totally unrelated topic, I hope those who visit are treated to a warm and friendly welcome, a cheery smile and a beer-tender's attitude that doesn't stink of "You are nought but an inconvenience to me and my Oh So important life". I didn't mention that I was The Prof last time I was there. And when I say "last time", I MEAN last time.

And if any other commercial interest wishes to utilise my little blog as a free community noticeboard - just ask. I probably won't say no. I will even happily visit anonomously and without payment or favour and write a piece about your place for my Beer People to make up there own mind about visiting.