Ale Stars of the Puckered Cheek 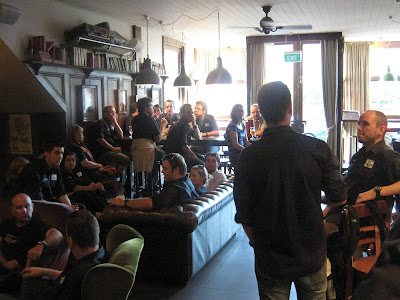 Ale Stars is growing up. No longer sitting in the high-chair at the end of the Grown-Ups’ Beer Table, it has shed its baby shoes and slipped effortlessly into the Bata Scouts school shoes of the Big Kids’ Playground with no need for the compass in the heel.

What other reason can there be for the success of Tuesday’s event? Ale Stars has not only tackled the challenging portfolio of ‘Wild Beers’ but just about packed the place out. Despite Shandy’s best efforts at ‘promoting’ the forthcoming meeting by incorporating the word ‘sour’, or ‘sah-ww-werrrre’ no less than six times, 44 expectant – and slightly nervous – punters turned out on a very pleasant Melbourne evening to experience a style so very removed from mainstream tastes that it probably could not have been attempted at Ale Stars a year ago. 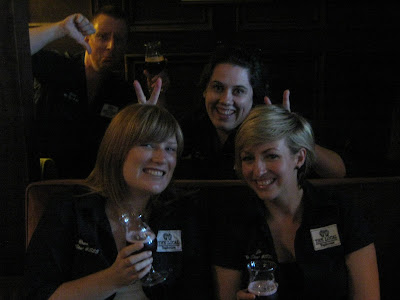 A selection of Lambic, Gueuze, Flanders’ Red and Oud Bruin greeted the crowd and, while most of these reviews are about the people and the atmosphere, this time around it is pretty much about the beer.

Lindeman’s Kriek was a surprise to most – and a pleasant surprise at that. Cherry pink in a very ‘children’s cough medicine’ kind of way (with an aroma to match) it seemed a strange ‘first-up’ beer. Sweet gave way to tart at the same time as spritzy carbonation gave way to a softening body. A show of hands saw the beer given the thumbs-up. It’s pole position would soon be justified.

Cantillon Gueuze gave the room an eerie silence as the apple-juice looking beer was delivered. The silence was broken by the sound of a few dozen cheeks simultaneously puckering. The expression ‘farmyard smell’ was bandied about and Shandy’s promise of ‘smell of horse blanket’ began to be understood. As it went down, the room warmed to the pleasant surprise of a lemon zing and a dry finish while another show of hands revealed the beers overall acceptance. 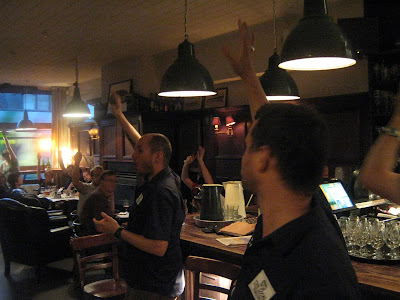 Rodenbach Classic shifted the colour wheel from a very pale straw to a rich deep mahogany (and don’t I dislike that as a beer word!) with some tart/fruity/malty elements and a taste not dissimilar to brown sugar and dark berry with some acid edges designed to surprise and delight.

A Liefman’s Goudenband, plain bottle-hand-wrapped-in-paper, closed the night with a beer that seemed to combine bits of all the previous beers, although this might have had something to do with the cumulative effects of the previous beers. Complex and refreshing, at 8% it was the biggie of the gig but again received well.

You’d be forgiven for mistaking this round of Ale Stars for a Union stop-work meeting or a primary school lesson so often were we asked for a show of hands! Combine this with the following elements;

A number of recent Ale Star coverts returning,
Several new members – two of whom finished the night by applying for membership,
One member participating in the trivia quiz by mobile phone from outside whilst smoking a cigar, 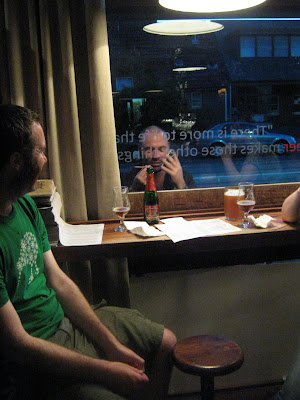 An amazing number of puerile jokes based on the word ‘Genus’,
Actually, it was just the same puerile joke repeated over and over,
And a trivia quiz designed to seriously handicap knowledgable types by awarding points for ‘funny team names’.
Actually, some of the team names were pretty clever...
and it was one of the most enjoyable outings to date.

P.S. Cheers, good luck and goodbye to Ale Star Matt (S31) who is leaving us to pursue a beer drinking Odyssey in the USA and then the UK. 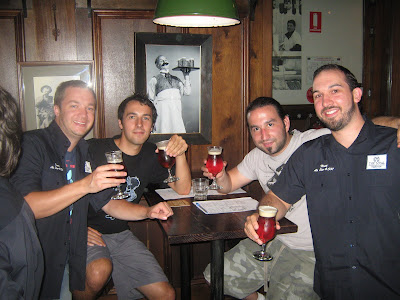 sorry for my absence - my first miss in about 14 months.

Look forward to "catch-ups" (as opposed to "tweenies") in the near future.

Missing you all lots. So much so that I nearly sneaked into a local brewery for a pint at lunch time today. Naughty!

Hope ale stars was a cracker, I love reading the write ups :)

Hi Briony! We miss you too and happy birthday (3 days from now!)
WOO

PS Briony, we came 2nd in Trivia... 2ND!!! AMAZING!!! The Prof is just jealous. And I consider it fair punishment for taking horrible photos of me and then showing everyone. So mean.

PPS Prof please dont take revenge on me for my gloating post by showing more people those horrible photos. Thanks.