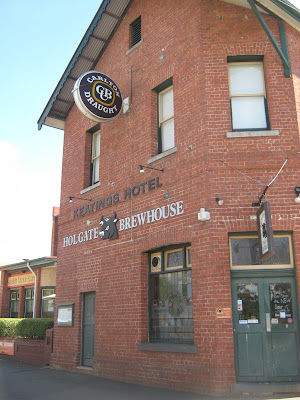 A nice Sunday with no commitments around the house and an empty spot on the calendar is a rarity in this household at the moment and with Valentine’s Day/Weekend coming up and a ton of other engagements after that I knew it would be a while before the opportunity would again present.

I had been meaning to stick to an earlier self-commitment to drink more beer this year – I mean, visit more interesting regional centres around this wide brown land – and decided that a trip to Woodend, less than an hour from Melbourne’s CBD, would be a good place to start.

The fact that Holgate Brewhouse sits at the geographical centre of Woodend and has a very well regarded restaurant may have come into play as well. I had also made a promise to Julian from Holgate’s that I would pay a visit so, as they say, all the planets were aligned.

The Holgate Brewhouse operates out of Keating’s Hotel, a 100 year old building on a corner in the middle of a picture-postcard town and has been home to the brewery since the Holgate’s took over the lease in 2002. The brewery itself was established by Paul and Natasha in 1999.

Richard and the staff looked after us beautifully and, as a restaurant manager, it as a treat to be on the other end of good service – although at one point Mrs Pilsner had to ask me to sit down and stop taking the girls’ orders. Old habits! The menu features plenty of local produce and if you can’t find a beer to match something on the menu, then you’re pretty hard to please.

As Mrs Pilsner had kindly offered to take the driving duties for the return trip (after my first three trips to ask a question saw me return with a new beer) I thought it would be a nice challenge to match each course with a beer. Beginning with a Pilsner and then a Macedon Ale I then had to try the newest, ‘Only Available at the Brewery’ beer, the Road Trip APA. Inspired by, well, a Road Trip to The States, this is a refreshing if slightly restrained take on the APA which went down beautifully.

While Mrs Pilsner took the eldest Pilsner for a shopping-walk I was left to mind the two Littlest Pilsners while they had dessert. It was fun. They had Bunny Ears Ice Cream and I had Holgate Temptress chocolate Porter then the Littlest Pilsner locked herself in the toilet and while Megan was very kindly extricating her I took the opportunity to tour the brewhouse. It was fun. 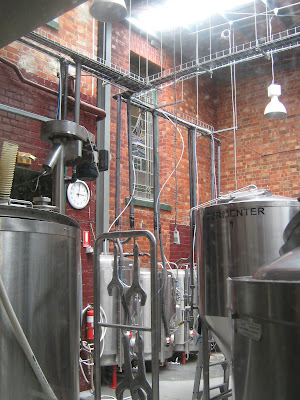 Holgate Brewhouse is well worth the short trip to Woodend if for no other reason that it is just very nice to sit at the bar of a nice real hotel having just had some nice real beer – some, like the Temptress, straight from the hand-pumped beer engine – and to listen to the sounds of somewhere seemingly a million miles away from the city and to not have to listen the clanging of pokies.

They also have some very nice accommodation available so if your driving partner is not as flexible as mine, you can make as many trips to the bar to ask questions as you like and not have to drive home.