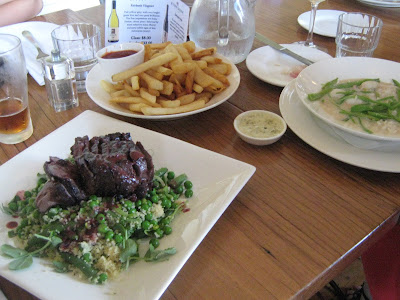 I was going to use this post to spruik a Beer Dinner that I’m hosting at The Courthouse Restaurant at the end of February. We missed out on a dinner during January as things just got a bit too busy and people were away but figured the weather would still be OK for some nice Summer/warm weather beers matched to some nice dishes this month.

I even had Neil Whittorn from Matilda Bay offer to ‘invite himself’ for the event, an offer I readily accepted. All I had to do then was get some bums-on-seats. I’ve been hosting beer dinners now for about seven years and, while getting people interested in a beer dinner is relatively easy, getting them to actually book and come to a dinner is a different thing altogether.

At The Courthouse we have held at least five or six dinners a year for the past five years and have built a solid base of reliable regulars who love coming along. But so many others make all the right noises while they’re in the restaurant having a few beers and then fail to reply when you send them an invite.

But not this time. Since just before Christmas we decided to set up a sub-list from our e-mail data base just for our Beer People so that we could send them a newsletter and an invite before we advertised the date to the general public. We did a mail out just over a week ago and I have spent the last couple of days writing to people to apologise for being unable to fit them all in! That’s right, after those early days of hosting a dinner for two tables and a total of six people we have now had to cap the numbers and put up the Sold Out sign.

This week, after we get through the joy of three separate sittings for Valentine’s Day, I’ll have to go out and get more beer. And more food. And some more staff.

Kevin,
I told you yesterday, the gig is SOLD OUT - I couldn't find a seat for St Arnold for this dinner! And, after that incident on the Air Force plane, mate, no-one wants you in their restaurant. But thanks for the kind words about Big Helga.

Katja,
If I see you next Tuesday I'll give you the details, otherwise The Courthouse Restaurant website has a bit where you can sign up.