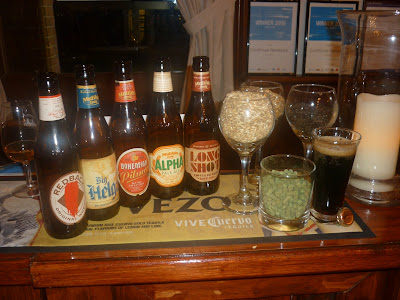 After a few more beers they took a punt and marked the date in the restaurant’s diary. They put up some posters in the restaurant and started spruiking to anyone who’d sit still long enough to listen. After a few weeks they had heard plenty of people say; “Oh, that sounds ... interesting”, but the bookings book stayed blank. As the day approached they rang mates and regulars and eventually got the thing off the ground. A table of four and a table of two.

Fast forward to last Friday and the dining room of the very same restaurant was as full as fat lady’s sock with 42 people awaiting the commencement of the very same restaurant’s fifteenth regular Beer Dinner. They had beaten another dozen and a half folks who left their booking a little late to secure their tables as well as at least twenty more who had replied that they had other engagements on the same night. I know how THAT feels.

I guess that counts as success borne of persistence, experience and being too stubborn to admit defeat. It also points to a pretty healthy state of affairs in the Australian Craft Beer scene that more and more people are (A) aware of what a Beer Dinner entails and (B) willing to turn up to one and enjoy themselves. That more and more venues are also now taking a chance and hosting Beer Dinners is also a great sign for the future. Just saying, we blazed the trail, OK!

Special guest for the night was Matilda Bay Brewing Company Head Brewer, Scott Vincent, who led the assembled mass through five of the brewery’s finest drops, all matched to some sensational dishes from the Courthouse kitchen. 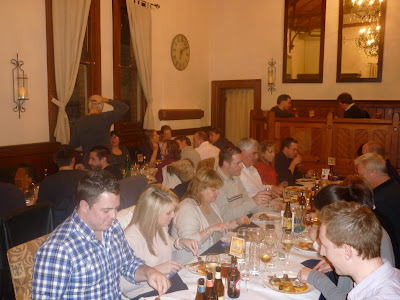 Beginning with the iconic Redback Original wheat beer and a similarly beer battered prawn with chermoula mayo, Scott told of his passion for brewing beer and, in particular, the joys of being the head brewer and thus brewing beers that you prefer to drink yourself. A short history of the brewery gave the guests an insight into the growth of the craft beer scene – without giving away the answers to the upcoming trivia quiz, planned by yours truly.

The next course, courtesy of one of our local suppliers of fine meats, was a German style Bratwurst matched with a German style Munich Helles, Big Helga. She turned out to be one of the most well received beers of the night as the Bratties were ... how should I put this? ... a little more spicy than the ones we normally get! There was a little trepidation throughout the room at the realisation that a Potato & Cauliflower Curry was listed as the second entree!

Fortunately, the curry was a flavour, rather than temperature-based dish and the Matilda Bay Bohemian Pilsner partnered delightfully with its sweet malt backbone, cleansing mouthfeel and taut bitterness. Just the thing to lead us into the main course, a mouth-wateringly sweet and rich lamb shoulder, slow cooked for six hours and accompanied by my MB personal favourite, Alpha Pale Ale. 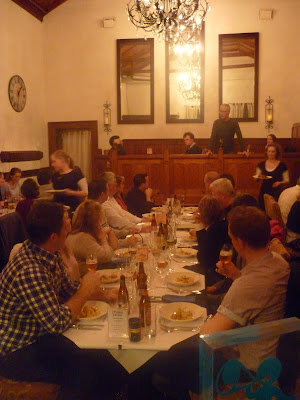 I had promised in my introduction to the evening that Beer Dinners at The Courthouse Restaurant are designed to inform and educate – even delight – but also to challenge the drinker. Challenge the perceptions of what beer really IS, to challenge notions that ALL beer is pale gold and fizzy and the challenge palates to accept that FLAVOUR in beer is not a dirty word. Or an optional extra.

Alpha is probably the perfect beer to do all of the above and so it came to pass that many who had never tried it before said they would probably not have thought to seek out such a beer but were glad they had tried it. Others were kicking themselves that they had taken this long to discover it. For others it was a case of “I understand why you came up with Fat Yak”.

I always prefix my Beer Dinners by encouraging discussion. I point out that I don’t brew any of the beers on the menu and therefore I won’t be offended if someone doesn’t like one of the beers. Obviously, there was a need to qualify that statement when you have a brewer of the calibre of Scott present and, as predicted, somewhere between Beer Number Three and Beer Number Four (not counting the two or three ‘earlies’ consumed) plenty of opinion was offered. Fortunately, much was positive and the appreciation for the combinations of beer flavours and food characteristics made up for any lack of love for a particular beer style.

To finish, the now well-warmed crowd was treated to a rich chocolate mud cake with Carla’s dreamy coffee sauce and a homemade tuille with a decorative “MB” piped onto it. It was paired with Matilda Bay’s limited release coffee-infused dark ale, Longshot. The retelling of the meeting between Scott and gourmet coffee roaster Toby Smith from Toby’s Estate had the guests realising that beers can sometimes come from the most unlikely sources and that sometimes a true story can be better than anything a marketing man can up with.

If the previous beers hadn’t challenged perceptions, then this one certainly did. 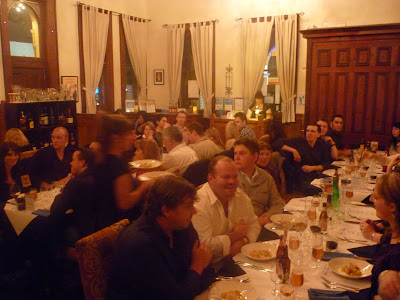 I’m glad that early setbacks with hosting Beer Dinners didn’t deter us from ‘fighting the good fight’ and persisting with the concept. I’m glad that people like Scott and Neil from Matilda Bay are happy to ‘invite’ themselves over when I call them for some tasting notes. I’m especially glad when I look around a crowded dining room and see so many familiar faces mixed with new faces, all of whom have taken a punt, like we did, to try something different and to allow oneself to enjoy it.

Just kinda makes it all worth the effort, really.

Prof! My fave MB is Alpha Pale Ale too :) Though the Dogbolter is also a lovely drop. Alas, I might have overindulged in Fat Yak since it's been out...and it's less hoppy than I remember. I've spoken to other folks that think it's possibly changed.

Had no idea you got the folks from MB down - that must have been ace. Good to hear you might be running Beer Dinners more often too!

Seems we don't have a choice! I had three different groups leave asking when the next one is planned. Plus, we had so many call to say they couldn't make this one due to calendar clashes we figured we're onto a good thing.

Maybe people are beginning to realise that Berwick is not THAT far away if there's something worthwhile at the end of it.