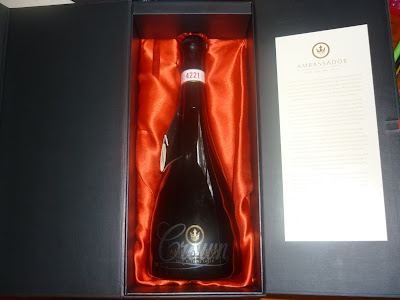 I was lucky enough to receive a Crown Ambassador Reserve Lager last week. A personalised gift in appreciation for my support of better beer appreciation. That’s what I reckon, anyway.

Part of me really wants to crack it right here, right now, let’s see what the fuss is all about. That’s the Beer Bloke in me. The Beer Lover, however, is sitting on my other shoulder whispering; “You know, this will improve with age, it will mellow and grow and mature. Put it aside and open it in three years, just like John Cozens told you!”

I tell you what; I’ll tell you about this beer so as to promote it and get a bit of discussion going in the Blogosphere, as is my want, and I’ll share with you my thoughts on its charms and that way you still have the chance to go out and get one of the few remaining units for commercial sale if you think it’s for you.

Those who have watched this blog grow from some waffle I was writing for the amusement of myself and two others into the same thing but with two hundred hits on a good day will know that I don’t do beer reviews. For me, beer is as much about the occasion as it is about flavour profiles, IBUs and Grain Bills – not to say these things aren’t relevant – it’s just that the same beer can have many different personalities depending on my mood, the moment and the motivation for drinking it.

And anyway, what I smell, feel and taste might not be the same for you and my perception of bitterness or sweetness or beeriness might be totally different to yours. In other words, make up your own mind – it’s never wrong. 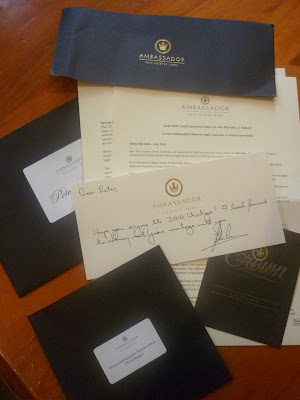 I love that we have a Crown Ambassador Reserve Lager. At the end of the day we need a strong beer industry in a country with a ‘rich’ beer culture and tradition and a relatively small population. The fact that we are moving away slowly from a swilling mentality, drinking less beer but drinking better beer means that we need the ‘Big Boys’ to play their part as well as the small artisan brewers. In this respect, The Ambassador has an important place in the beer landscape.

In a more visual way, it is doing for the beer scene what VB Original Ale did some years ago. What Willie Simpson described as the ‘premiumisation’ of VB was a move from “all beer is pale gold and fizzy swill” to “here’s a bit of a nod to the beer traditions of our past” with a beer that was based on what VB may have tasted like when it was an ale of the people. It also gave the opportunity to regular VB drinkers to ‘upscale’ without seeming a beer wanker; “What the F@#k ya drinkin’ there, Shags, some sorta poofter beer?!?” “Naaah!! Just old fashioned VB ya dickhead!”

I welcome Crown Ambassador Reserve Lager because it puts more ‘premium’ into a product than a fancy bottle and two cents worth of foil label ever could and it at least says that The Big House is prepared to brew something that is NOT for everyone but might just be much appreciated by those for whom it is.

After wasting all that wordspace on tangent-thinking, I’ll now prepare two more posts for your viewing pleasure on the actual product itself.

Not that I’ll review the beer, though.

P.S. If you can’t wait a few days to see what I think, here’s a piece by Willie Simpson and one by Matt Kirkegaard.
Posted by Beer Blokes at 09:30

The cynic in me can't help but think of the old saying "mutton dressed as lamb". Come on CUB, $90 a bottle? Talk about "premiumisation" gone mad, and of a beer that's nothing more than repackaged swill to begin with. Good luck with the tasting, Prof, especially as it's come at no cost to you! I pity those that hafta pay for it...

Fair points Koops. I heard John Cozens on SEN's Beer O'Clock segment last night talking about the 08 Vintage 'going for' $360 on EBay so this one seems cheap!

The fact that many retailers are saying they have sold all their stock indicates a market for it we'll have to sit back and wait to see if it is a long term success.

I guess we Craft Beer lovers have plenty of limited release stuff to keep us happy year round so it's not really aimed at us?

I bought the Ambassador 2010 a while back and eventually found an occasion to drink it. I followed the instructions on how to drink it (chill then let rest for a short time then rotate the bottle to distribute the yeast). But when I opened the bottle and I smelt it I was surprised that it smelled like it was off, like it was out of date. I thought it may just be the smell and I had a small sip of the beer. It tasted awful.
I was wondering if anyone else's tasted really bad or if I just had a bad batch?