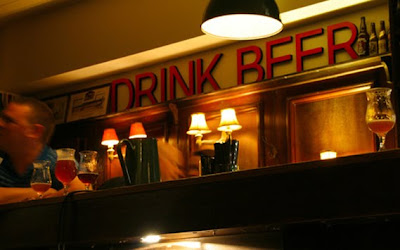 Good Beer Week is shaping up as the biggest thing since ... well, since the biggest thing you can think of and it keeps getting bigger. If you had to be a beer nut then you could do worse than to live in Melbourne during the third week of May let me tell you.

The Local Taphouse St Kilda has opened up and taken a fair old bite of Good Beer Week with a very special Ale Stars on Tuesday May 17th and then on the Thursday 19th they will turn the downstairs area over to a rather lavish spread of ‘champion’ proportions.

Brewers & Chewers is a marvellous concept and one of which any self respecting beer nerd would be proud. A removal truck will pull up outside and clear the decks completely (leaving the bar and its twenty taps, of course) leaving behind a cosy nest of long tables and comfy chairs. Upon these tables will be placed a sumptuous three course feast and some special beers along with some very special guests.

A veritable cavalcade of “Beer Champions” will be presented to the assembled guests, in the form of a quick introduction and chat with your very own Prof Pilsner before they are dispersed to tables around the room to share their time and talents with each group. At the ringing of a ceremonial bell, the Beer Champions will arise and move one table along to continue the festivities until all tables have been visited or the champions have no voice left.

Beer Champions already confirmed for this ambitious first-run project include New Zealand’s Soren Eriksen from 8 Wired Brewery and BrewDog’s James Watt. As I have had extensive practice working as Shandy’s translator for the past three years of Ale Stars, James and I should have no problems communicating.

Local Champions confirmed are Beer Diva Kirrily Waldhorn and brewers Brad Rogers and Brendan Varis from Stone & Wood and Feral Brewing Co respectively. As good friends all of Beer Blokes, a special bell to stop us from chatting away together all night may need to be sourced.

So, for just $75 per head (bodies admitted free of charge – Dad Gags, gotta love ‘em) guests will enjoy Chef Richard Smith’s culinary delights, brews from each of the guest brewers, some lively and entertaining banter and some Q & A from the Prof as well as the exclusive company of some of the WORLD’S most respected Beer Champions! How good’s THAT!?!

If you have read this far and still not secured your booking, get over to The Local Taphouse blog and book a spot. Before the Beer Nerds hook all the good tables. Links to the page as well as to The Crafty Pint’s Events diary for Good Beer Week are popped below.

Look forward to seeing you all there,