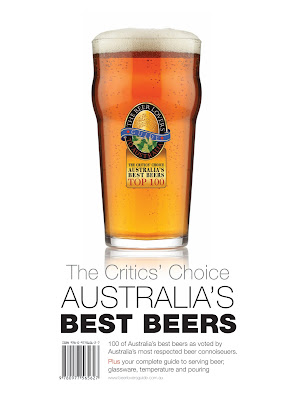 When the publishers responsible for the Beer Lovers Guide to Australia asked me if I would be interested in helping out on a new beer book I was happy to oblige. The book, they told me, would be a list of Australia’s best beers as selected by the experts.

To cut a long story short, ‘helping out’ grew into assembling and contacting the Voting Panel, crafting the voting criteria and then editing, contributing, proof reading and writing the introduction, the conclusion, the bits in between and then the Media Releases. That’ll teach me to agree on the fee before sussing out the work required!

Anyway, in the lead up to the launch of The Critics’ Choice this Friday it was decided to count down the Top 12 beers and give away the perfect dozen to some lucky bugger who did nothing more special than to click on a button on a Farcebook page. Two lucky buggers, in fact, each day for twelve days. How good is this craft beer caper, really?!

With one beer of the Top 12 revealed each day the webosphere has been abuzz with conjecture and congratulations, discussion and debate. But no one can really properly argue that beer in this country is all of a sudden in a pretty good place. It doesn’t seem so long ago that apart from one or two publications it was near impossible to find beer books in the mainstream.

It has been an experience to see this book ‘unfold’, as it were, and to hear the debate and the guessing at which beers should/would/could/MUST be in the Top 10. This is the one thing that was hoped above all else when the first tentative steps were made towards publishing the book. Rather than wish for no controversy or argument, it was hoped for. As a wise old man once said, “The only risk is to take no risk” ... or something like that – you know what I mean. If God hadn’t meant us to make mistakes then he wouldn’t have put those little rubbers on the ends of grey-lead pencils, I say.

And so, on Friday, the Critics’ Choice is born. But don’t race out and buy a copy just because you’re a mate of mine – I’m not on commission and, anyway, my pay cheque came through last week and that twelve dollars fifty is already going towards beers. Buy it because it’s one small step towards good beer becoming as popular as mainstream beers and because it is a cracking good book showcasing 100 damn fine Australian beers.

In fact, buy two copies and leave one lying around on the desk of the bloke who buys the office beers on a Friday arvo, or on the coffee table of the mate who always turns up to your parties with a six-pack of Bogan Bitter under his arm. Buy a third one to slip into the birthday present for the old man or for that dodgy uncle who buys his beer in ‘blocks’.

I’ll even happily autograph them for you when I bump into you at any of the many beer related events that I trick Mrs Pilsner into thinking I have to attend ‘for work’. You know? And keep up the good work, all of you. Good beer needs your continued support!

The Critics’ Choice – Australia’s Best Beers is out on April Fool’s Day (no, really, it is) April 1st 2011 and is available from all newsagents and good book stores and even from some of the crappy bookstores as well. You know the ones. It’s only $14.95 so no excuses really.

Email ThisBlogThis!Share to TwitterShare to FacebookShare to Pinterest
Labels: The Critic's Choice