The Diva & the Darlings of Victorian Beer 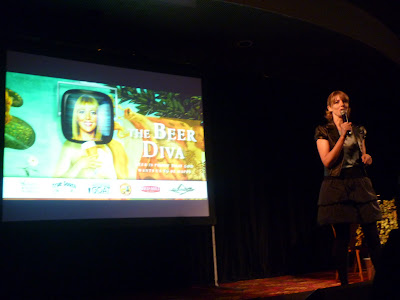 In May last year I was in Sydney especially to support Beer Diva and good beer buddy, Kirrily Waldhorn as she ventured on stage to present her first ‘live full arena cabaret multimedia and sensory spectacular’ one woman beer show.

Based on the material central to her Beer Diva beer and food matching events and covering all aspects of the Beer World in a fun and entertaining way, the show titled “Beer is Proof God wants us to be Happy” set out to explode the myths surrounding beer and bring good beer to the people.

At The Thornbury Theatre she reprised the show for the Melbourne Food & Wine Festival with the assistance of five of the state’s most prominent ‘Women of Beer’ and it lost nothing in either the translation or the expansion of its talent.

Those interested in the Order of Business of the show can click here to read my review of last year’s Opera House performance and the rest of you can stick with me and enjoy my take on the reworked performance which played a one-nighter to a large and appreciative and well lubricated audience on Friday.

The first point worth noting is the support given by the brewing community as evidenced by the many familiar faces at tables set out across the floor of the very elegant Thornbury Theatre. From brewers to beer book publishers and venue operators and staff there were plenty on hand to make sure the night was given every chance of success.

More importantly, the remainder of the crowd appeared to be average punters keen to see what good beer was all about. Many, I’m sure, were also there on the basis that the words ‘beer’ and ‘women’ featured prominently in the advertising and they were not disappointed. A couple were probably even there just on the off-chance they’d see Sam Fuss in heels. They were equally not disappointed although the ‘heels’ appeared to be Blundstones.

The format for the show was similar to The Beer Diva’s previous outings but this time each beer style would be introduced by the Woman of Beer from each brewery. After an entertaining concise history of beer we elected Beer Captains and cracked on into the first of five beers, Bridge Road Brewers Chevalier Saison and heard former brewer Nardia McGrath discuss its charms. More familiar with seeing Nardia in jungle green brewery outfit, she shone in her finery. It’s fair to say that none of the girls sought to out shine the host, however. Especially Sam. 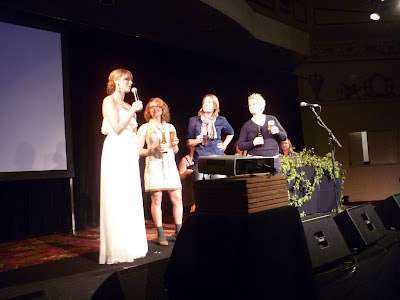 Beth Williams from Hargreaves Hill then talked us through their Hefewiezen and teased us with the possibility of returning later to share her talent for opera singing. As the show progressed we were walked through various beer myths and misconceptions and the interactive nature of the evening ensured everyone had a voice. Some, as you might guess, took this invitation a little too literally and Beer Captains were required to retain some semblance of order. Except on those tables where the Beer Captains were the worst offenders!

The sensory experience was taken to the next level when Karen Golding introduced the Red Hill Brewery Pilsner complete with table rations of fresh estate grown Tettnanger hop flowers. ‘Beer Floaters’ became all the rage as the crowd enjoyed the aroma and flavour of fresh ingredients.

Jayne Lewis from Mountain Goat shared her Rare Breed IPA after Kirrily had regaled us with tales of the original voyages to the Jewel in the Imperial Crown that first brought us this hoppy style. By now the audience was well refreshed and each brewer and her beer were welcomed warmly to the microphone. But the love for the Goat IPA was soon to be eclipsed by the Rock Star welcome reserved for Melbourne brewing identity and all-round-nice-girl, True South’s Sam Fuss.

Not enough was it that Sam had bottled some of her Cherry Bomb Porter especially for the night, but each guest was supplied with a Cherry Ripe chocky to enjoy with the beer. And, in an impromptu in-house auction, Sam managed to sever $22 from an eager punter in return for the half eaten sample that had inspired the brew in the first place. Half eaten and sat on. 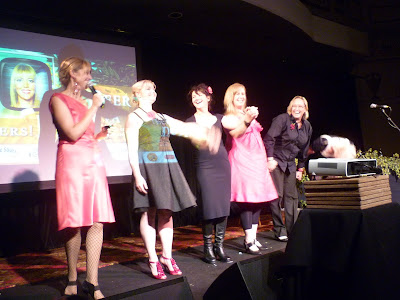 As the night wound up and the punters began to make their way home Beer Blokes, along with The Crafty Pint and The Wobbly Thong (remake of The Goon Show, anybody?) managed to steal a few moments with some of the girls who had come along to see what all the beery fuss was about. It bodes well for the future of good beer in this town that so many felt comfortable enough to venture out to catch a show which most admitted they knew little about. Having said that, this made it pretty easy to exceed their expectations.

They all left happy and just a little bit more knowledgeable about that mysterious amber nectar which, for so long, seems to have been dominated by the male of the species. That the girls are now a driving force at the production end, as well as increasingly at the retail end, makes for a future that is as full of promise and as well balanced as the beers they are brewing.

Thanks for swinging by the ...Wankers

It wasn't for myself - was just going to recommend some good Melbourne based bloggers. Up up in Brisneyland.

I have enjoyed reading your articles. It is well written. It looks like you spend a large amount of time and effort in writing the blog. I am appreciating your effort. .