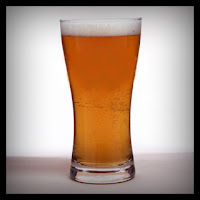 In the middle of this month I detailed the anniversary celebrations I shared with Mrs Pilsner.

No, not those details. I shared the story of dinner and drinks lists and I stated my surprise at the shallowness and outdatedness of the beer offerings at the restaurant of one of this county’s most charming and elegant hotels.

Well, yesterday I discovered the ‘Yang’ to this disappointing ‘Ying’. And it was not expected and it was not planned. We had just endured a fairly hectic week which culminated in Dr Lager and I hosting a fundraising Trivia night for the pre-school and Mrs Pilsner and I decided to take the family out for Sunday brunch. We decided on a restaurant tucked into a little shopping strip in the local suburbs that we had planned to check out anyway and packed the car with excite children and headed out.

Lunch done and we are heading back to the car. Mrs Pilsner spots a little Asian Grocer on the way back and decides to pop in for a look. Two of the little Pilsners are not in the mood for chicken’s feet and noodle nosing so I took them under my wing and went window shopping further on down the street.

Which is where I found it. Or, where Beer Karma led me. A little non-descript bottle shop at the end of the shops. No big signs or marketing fanfare of any kind, just a shop. I figured I had a minute or two before my two charges went postal and started to annoy each other to the point of enforced separation so I ventured in. At the very back of the shop, past the stacks of standard lager offerings were a couple of fridges, each bearing a hand drawn label. ‘Local’, ‘Imported’ and ‘Boutique’. I passed over the local, until a couple of bottles caught my eye. Here were beers from a West Australian brewer that I had not seen before, nor hear of. Nice surprise. What else have you got for me, Beer Karma?

A nice selection of craft/standard beers, including some seasonal limited releases! Nice! On to the ‘boutique’ section and there I found Salitos – a fairly hard to find Mexican Tequila beer – and while not a beer of any great pedigree, it is one that I have been trying to cross off my list of collectable beers! A Czech pilsner in a 500ml bottle and a low carb ‘idea beer’ joined the craft wheatie and a another local and the collection was capped off by a beer from Laos! The imaginatively named ‘BeerLao’ went down a treat with dinner that night.

A couple of spare minutes had just rewarded me with a very pleasant beery discovery. My faith in Beer Karma had been restored and Mrs Pilsner got what she needed as well.

I expect that the two kids I was responsible for will find their way home in the next two or three days.