Or, how to brew really good beer.

This is a term that most beer-heads will probably have encountered, some will be able to pronounce and a few may understand. For all of the above and those new to this Teutonic mouthful, here is a short history of, and insight into, the wonderful world of ‘The Bot’.

Literally meaning ‘purity order’, The Reinheitsgebot is often referred to as the German Purity Law and is perhaps the oldest quality control law in history. It is, and always has been, a beer law and was proposed sometime around 1487 and officially enacted in 1516 in Bavaria, now a province of Germany. It has the purpose of regulating the sale and the production of beer – though I should say it had these purposes as it was repealed as mandatory in 1987 – and we are lucky as drinkers of beer to have it.

It basically stated that beer could be made using three, and only three ingredients – malt, hops and water. When first enacted, the magical properties of yeast were yet to be understood and identified and were not included in the law until the 1800s after some cheese eating surrender monkey called Louis Pasteur discovered the role of the single cell floater that we know and love as yeast.

Barley was specified as the only malted grain to be used, not because they thought that wheat couldn’t make a good beer, as we all know it can, but because they wanted to save the wheat and rye for bread making. Bloody bakers! The Germans have a rich tradition of wheat beers and the part of the reasoning behind the Reinheitsgebot was to avoid a price war with the bakers for the grain. Fortunately plenty of German brewers kept making wheaties. I suppose they would have called them Weizies?

So that covers the yeast and the malt. The yeast was not included because it ‘didn’t exist yet’ and the barley malt was to keep the Dough Boys happy. Now to the hops. The hop clause was written in because before the Bot came along all sorts off stuff was used to preserve the precious amber liquid including soot, odd looking forest mushrooms and herbs like stinging nettles. Must have made the beer marketing mans job difficult;

“Hey Siiymon, make us an ad to flog this new beer, would ya!?”
“Sure, how about ... ‘now with the rich full flavour of that stuff in the bottom of the fireplace and dodgy fungus’?”
“Yeah, like it, like it. Should make medieval bogans think they have a better chance with the plague hags!” 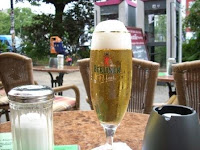 There are those who stand either side of the Reinheitsgebot as far as support goes. Many believe it to be the greatest quality control measure since the invention of the ‘No Fat Chicks’ sign whereas others see it as a way of dominating a market and discouraging regional specialties and ‘odd-ball’ beers. As we know, the Germans are pretty good at producing some special sorts of beers; smoke beers, radlers, hefeweizens, Marzens, Altbiers and Kolsch. This might suggest that, while beers brewed under The Reinheitsgebot are almost guaranteed to be of a pure and consistent quality, it hasn’t stopped the beer world in its tracks out in Deutschland.

Regardless on where you stand in the argument, the Bot has ensured a place in the wonderful world of beer and, if nothing else, it has given me a good post subject. Happy drinking.