So what’s your point? 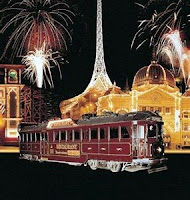 Letter to the editor in my local state daily this morning caught my eye.

“Recently I had the pleasure of dining aboard the colonial tram car restaurant, one of Melbourne’s best tourist attractions. However I was dismayed when I realised the $130 a person cost included unlimited alcohol. I feel this not only discriminates against non-drinkers, but naturally increases the amount of alcohol consumed.”

At first I felt a little sorry for the writer and on two fronts – one; he was DISMAYED at the prospect of unlimited alcohol and two; he was a non-drinker.

I had a quick think about his argument before I ‘naturally’ dismissed it as crap. Have a quick think yourself, champ, before blaming all of society’s ills on the grog. At $130 a head and a world class menu which DOES NOT include chicken parma and nachos you’re not realistically attracting a huge number of bogans, dickheads and potential pissed idiots are you? Most guests who shuffle on to the charming old rattler for a scenic tour of Melbourne and a nice four course meal are not about to kick off their thongs and pull out a form guide while waiting for the barman to pour them a bucket-o-bourbon-and-cola.
For the correct answer to the above, see picture below. 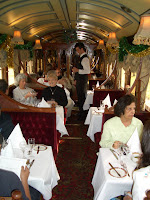 “Surely non-drinkers should not be subsidising those who choose to indulge.”

Surely normal people would either choose to dine at a restaurant that offered separate food and drink deals or would do the polite and sensible thing and make a courtesy call to the tram car restaurant before dining and confirm the conditions or negotiate a discount. Twenty years in the restaurant caper and I can assure you that the set price will cover the costs of the overall experience and will not financially disadvantage the non-drinkers. At least they are being upfront about the cost. If they said the cost of the meal and the ride was $130 and no one pays for any drinks you probably would have said ‘yippee!’ or whatever it is that non-drinkers do when they are happy. They can be happy can’t they?

Besides, it would be impossible to pay for drinks as you go since they took all the conductors off the trams.