Rebuilding – One beer at a time 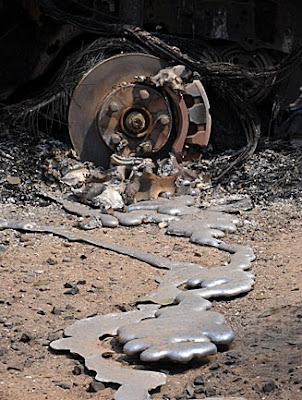 The Victorian Bushfires which devastated several entire communities on Black Saturday, February 7 could not burn the spirit of the greater community. The generosity shown by so many people in so many ways is as inspirational as it is helpful. From sausage sizzles to street collections, from garage sales to farmers markets, it seems everyone has found a way to raise much needed funds to those who have lost so much.

The crew at The Local Taphouse know the mystical community strengthening powers of beer and it was only logical that a fundraiser should be held to allow the followers of the Amber Nectar to show their support for those affected by and those assisting after the bushfire tragedy. The loss of the brewery at Hargreaves Hill gave the event a local focus and it was decided that half the proceeds would be directed to Simon and Beth to get them back and brewing as soon as possible.

Owners and operators of The Local Taphouse, Steve and Guy got the keg rolling with a first up donation upon announcing the benefit night, along with the proceeds of the door and assorted raffles, auctions and beery prize packs. Before long there was a list as long as a draught horse dray of brewers donating kegs, t-shirts, six-packs and pallets of beery cheer to ensure that the night would be a large one.

Stand-up comedy and plenty of good beer on tap kicked the night off after which the zany Janet (host of Sunday Night Trivia) conducted auctions and raffle draws. A full list of sponsors, supporters and suppliers is printed below. Look after them when you can. Fast and furious bidding saw the Beermasons' supplied beer gift packs go for a tidy sum and some of the Taphouse staff might be handy people to know in the next few weeks! Seriously, with all the six-packs, gift packs, t-shirts and stuff flying around you’d be forgiven for thinking you had stepped into a beer merchandise convention. Or maybe the set of the Price Is Right if it was run by Les Patterson rather than Reg Grundy.

The night stepped up a gear with The Band Who Knew Too Much – some seriously good noise – who had the crowd dancing and working up a thirst. Two very worthy pursuits. As the night wound down and the last of the punters sauntered off into the warm Melbourne evening, there was time to reflect on the success of the night both socially and fundraising-ly - a feeling of satisfaction for the result, tinged with sadness for the reason.

The Local Taphouse managed to raise around $13,000 on the night from a tenner for entry, management donations, a hefty dollar match between Greg Hack and Accenture, raffles, auctions and, of course, beer sales. I helped out a bit in this department. Plus I ended up going in on my own and I gave Stephan a twenty at the door and just pretended I was there with a mate.

A special mention must go to the bar staff of The Local Taphouse who made the decision to donate all their tips from time of the bushfires to the benefit night two weeks later in a gesture that was as inspirational as it was generous. $2500 was no small contribution to the cause.

Congratulations to all involved and all those who drank so generously – but let’s hope we don’t have to do it ever again.

And finally, to Steve, Guy, Justin and the crew at The Local Taphouse, thanks for all your generosity at a time when I know you must all be as flat out as Oprah at a sticky bun eating competition.
Posted by Beer Blokes at 14:59

What a fantastic effort from everyone.

Pete, did you take that photo yourself up at Kinglake? What an incredible shot. Carol said you were on duty up there this week? Take care wherever they send you, you are all doing such an amazing job. xxoo

Thanks, Mrs Lager,
That shot was a media one, I'm still sorting out my photos at the minute. Thinking that all the images and stories I've collected might be better in a blog of their own.