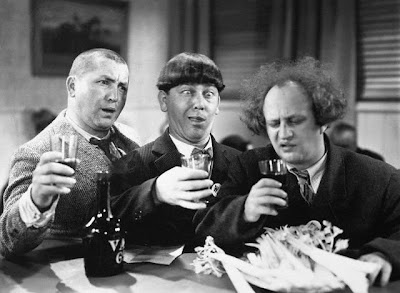 Here at Beer Blokes we like to keep our readers informed and enlightened in as many aspects of the Beer World as we can think of, research or make up. With the best information, facts and figures as well as modest opinions, we think our friends are better able to make wise decisions when it comes to buying, brewing and drinking beer.

I have written before about how beer is a very egalitarian beverage. It is accepted universally and no one looks silly drinking it. Unless they are seriously pissed, then they can look particularly silly. And often very funny as well. What I mean is that a burly blue-singletted boof head called Bluey can not sip champagne from a crystal flute without looking just a bit ... odd. But a glamorous leggy socialite can sip a Stella Artois or a Beck’s and not look so odd. Unless she were to crack the cap between her McGits and then skol the whole stubby in one go while her similarly elegant companions chanted ‘Drinkitfaster, Drinkitfaster, Oi Oi Oi!

But you get what I mean. Beer is everybody’s’ drink but it still has some guidelines for etiquette. And perhaps the most important one to get right is The Shout.

The Shout is an integral part of the drinking culture and anyone who would attempt to bypass, derail or otherwise tamper with The Shout will soon be drinking alone. It is a venerable and ancient institution, although I think it is Australian made. I’ll have to look it up. Wait here.

Nup. There isn’t a lot to be found in the way of historical information on the net so I will have to give you all the straight guff from my own collection of books and such as well as a lifetime of experience.

The principle of The Shout is fairly straight forward. You buy yourself and your mate a beer. When you have finished your beers, your mate buys a beer for himself and one for you, in return. If there are more than just you and your mate in The Shout, then the beer total needs to be adjusted accordingly. The number of beers bought in each Shout is equal to the number of drinkers in The Shout. Simple. But, like most things in life, The Shout has traditions and responsibilities that must not be messed with.

Once in The Shout you have accepted a responsibility to your fellow drinkers. DO NOT accept beers from the others if you are unable or unwilling to fork out the ‘Laurie Nash’ when it is your turn to shout. DO NOT be in the toilet whenever your turn comes around. DO NOT ‘nurse’ your beer into old age thinking that you won’t have to buy if not everyone has finished. DO NOT get bent out of shape if the others begin to toss around subtle hints to encourage you to fulfil your obligations. These hints may range from such mutterings as; “It’s a bit dry over here”, "A man's not a camel" or “Pity they don’t sell beer around here...Oh, they DO!?” to “Get off your fat jacksie and buy some bloody beers you lazy fat bastard!”

If for some reason you are not able to discharge your drinking duty, the correct procedure is to buy your round on your way out after making suitable heartfelt apologies to those you intend to leave behind. Do not leave your mates with the impression that they are not worthy of having you drink with them. This is very Un-Australian and Un-Blokey.

The Shout is essentially a creation of average easy thinking and easy drinking menfolk. For as long as we have had The Shout we have kept it simple and it works best when all the drinkers are having the same thing. This is due to the fact that the pubs in times of yore had as many as ten taps – all serving the same beer – and all the blokes were blissfully content to drink that what came out of the tap. Today the same pub may have sixteen taps dispensing different beers of varying styles from a dozen countries. But The Shout is inbuilt with an automatic default update setting. Beer is beer is beer.

Whatever is being drunk by the drinkers in The Shout can be accommodated. But what does happen if all the drinkers in The Shout are NOT drinking the same thing? The whole thing still works but it may need some adjustment. For example, if two or three are drinking light beer instead of heavy, The Shout still operates normally except that two or three are paying a little more for the other blokes drinks than the other blokes are paying for theirs. Likewise, if one or two are on the bourbons or the scotch, this can fit in provided all are in pre-agreement. There are a few minor exceptions to this guideline.

The bourbon boys should not switch between that and beers. Nor should anyone be permitted to ‘upsize’ outside of their shout. You can’t be buying pots for your mates and then decide “I might just have a quick Flaming Lamborghini, actually” when someone else is buying. The Shout works because you don’t even need to ask what the others want, just a quick nod and a point to indicate that you are ’up’. You may sit out of a particular round of The Shout without bringing social disrepute upon your family name – as long as you don’t sit out your shout. The other exception to The Shout guidelines is that it is perfectly reasonable and permissible to exclude any member who wants to drink Pimms, Pernod, Campari or Vodka Cruisers. Unless they are girls. They can drink poofy drinks, but not in The Shout.

This brings us to another aspect of drinking history that The Shout has had to deal with. It is the gender factor. It was not so long ago that women were not even allowed inside a public bar. They were confined to the Ladies Lounge to sip raspberry cordial or shandies if they were fortunate enough and it was quite simply unheard of for them to drink with the boys. Today it is expected that ‘a bit of skirt’ will be present when you step into a bar and it has become more and more common for women to be drinking beer with the boys. Brewers are now even ‘targeting’ the female sector of the market when developing and marketing beers. See Pure Blonde, Boag’s St. George and Corona.

Wether male or female, the rules of the shout are simple. Number of people in the shout must be equal to the number of shouts in the session. Ideally. We are still duty bound to be responsible drinkers and to care for our fellows and The Shout is sympathetic to this. Be sensible and don’t create a shout of fifteen or twenty blokes, all drinking pints or schooners, and then expect to pilot the Commodore home from the city to the outer suburbs. You will be lucky to get it as far as the outer car park. And if you get busted by Johnny Hopper, don’t blame it on The Shout. It’s all your doing.

So, enjoy The Shout, don’t disrespect The Shout and The Shout will live on for our sons and daughters to continue into future generations. Keep the flame of mateship and Blokehood alight as a beacon to those folk less well off than ourselves who don’t have pubs and beers and shouts.

In part two we will look further at the intricacies of The Shout and what happens when people try to rort the system. It will also contain a guide to Bad Shout People and How to Avoid them.

Email ThisBlogThis!Share to TwitterShare to FacebookShare to Pinterest
Labels: The Shout

...please where can I buy a unicorn?