Big Helga and the Professor 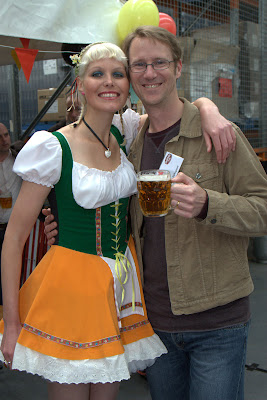 As a Beer Bloke I’m often asked for an opinion on a beer. Usually it’s a guest in the restaurant or a mate at a function or even that little old lady in Dan Murphy’s who was happy to ask a stranger (I was also the only other person in the craft/imported beer section at the time) for some advice. And while I’ll never just bag a beer – I might strongly suggest an alternative – I always try to say nice things.

When there is an added incentive to say nice things – say, the offer of a very nice, badged beer glass and some free product, well, you know...you know how it is... ?
It doesn’t make any difference.

When I was approached to accept a free gift and some free pots in return for promoting a new beer I said I would be glad to help out. Anything to get more people drinking better beer and all that. I added that I didn’t really do ‘beer reviews’ and I wouldn’t say anything that I wasn’t prepared to stand behind.

At this point I wasn’t told which beer I would be spruiking, although; “A large boutique brewery client that wants to send you a 6-pack of their new, unreleased publicly Munich style Lager/Pale Ale” did lead me to suspect that a rather tall German lady might be arriving shortly in liquid form.* And don’t we all want that!

Plenty has been written and spoken about Big Helga in the beer blogosphere recently and I have to admit that I already had a soft spot for Matildas Bays’ latest garage-engineered brew, having sampled it with the brewers at the Microbrewery Showcase back in November.

She is a lovely light-golden lager who, while maybe not strictly speaking an Oktoberfest lager, certainly has the required ID that would see her easily admitted to the beer tent in Munich. There is a bit of debate about as to whether or not it has too much hop flavour to be a true Helles or not enough to be an Oktoberfest beer, but either way, she is refreshing and rewarding.

And, as it is with all good beers, it has some stories attached. I can promise you, from years of suggesting and then pouring various beers for guests, the easiest ones to sell are the ones with a story. Big Helga’s ‘heritage’ may be straight from the first chapter of the Marketing For Dummies Manual and you can take that for what it’s worth, but it has a very credible back-story concerning the lass representing the ‘original’ Big Helga at the product launch back in October.

MB Executive, Jamie Fox had found it impossible to find a model with the suitable height to carry the role until a late night tram ride revealed a possible candidate for the future Helga. Apparently half-tanked and inarguably half her size, he made the last-second decision to jump off the tram when she did and accost her in the street. The old yarn about the girl-on-the-tram and the ‘modelling agent’ could easily have played out with the pint-sized stalker gazing at the night sky from the gutter – he didn’t even have a business card on him to back his sketchy claims! Fortunately she took the chance and now Big Helga lives!

For those beerily-minded folk reading this Big Helga’s ‘stats’ are as follows;
She sits around the 20 IBU mark, giving her roughly the same bitterness as a VB or Toohey’s New and she weighs in at 4.7% ABV. For the really beer-nerdy among you, her ‘complexion’ is 12 EBC making her just a little more golden than a Helles might ordinarily be. She is bittered and flavoured with a NZ Pacifica hop in both kettle and dry form producing plenty of flavour without too much bitterness. Just what you want in a good woman.

But, to finish, she IS a little different. Brewer Scott Vincent describes her as a good lawnmower beer for the session drinkers but a beer which rewards the Thinkin’ Drinker with some inner complexity. Some tropical fruit aromas and a dry resonance makes her very palatable and a good partner to the increasingly popular older brother, Fat Yak.

Did I make you want to go out and get yourself some? Because I could do with some promo stuff and I gotta earn it first!

*At the time of posting, she still hasn’t arrived in the promised six-pack form.

P.S. The pic I found on Matt's blog probably doesn't show just how tall Big Helga is - Matt is a pretty tall streak himself. Is it too late to ask if I can use your pic, Matt?
Posted by Beer Blokes at 13:05

Always welcome to use a picture of a pretty girl who seems vaguely interested in standing beside me (even if she was paid to do so).

had the opportunity to sample Big Helga at the RACV Club last week.

A delightful beer (all three times) and the accompanying glass is pretty cool too.

I find it utterly unpalatable. And you know me, i like my German (and German style) beers. It tasted of the yeast that brews Carlton Draught... ick.

I have to say that the big girl is actually growing on me. I was able to sit and 'contemplate' with her and got some subtle little middle notes, and on a stinking hot day I was able to simply knock one back and blast a wicked thirst as well. Maybe it's a beer that translates better as a bottled beer?

I also have to report that an e-mail was received indicating that my promised freebies are on their way. Fancy me not trusting the marketing department!