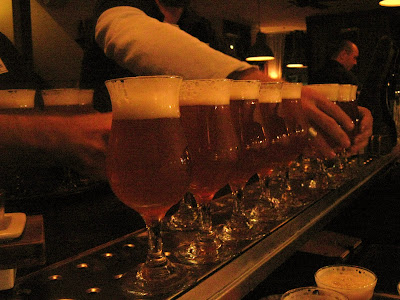 Ale Stars sessions usually focus on a style and four samples of the same kind of beer are compared and contrasted. But now and again, as with Luke Nicholas and his Epic showcase, we get to work through a series of very different styles from a single brewer. And so it was that a record crowd of almost 70 gathered cosily – and maybe a little noisily – into the lounge to be treated to four beers from acclaimed and multi award winning Western Australian outfit, Feral Brewing Company with special guest and head brewer, Brendan Varis.

First off, let me say that Brendan certainly assured the room that he was a poster boy for the “Brewers Are All Really Top Blokes Who Are Passionate About Their Craft But Don’t Take Themselves Too Seriously” Club. Down to earth, engaging and entertaining, he said enough to inform but was keenly aware of when it was time to stop talking and let the beer do some of its own. 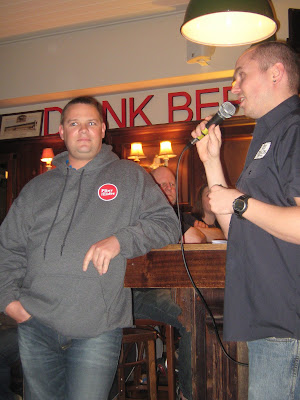 We began with the new I Wit 2.0, a beautifully presented Imperial Wit based on the flagship Feral White, but with extra zing, a little more sweetness and a lot more character. It was particularly pleasing to hear Brendan explain that the contracting out of the packaged White that we on the east coast have been getting was not up to scratch and the beer will be ‘quarantined’ at home until their own bottling line is up and running. I know this, for me personally, answered a lot of questions.

Next up was a slap across the chops for anyone who thought Feral could be defined by the above mentioned bottled stuff. If the I Wit didn’t have you thinking; “Hmm, that’s a bit different”, then the Dark Funk sour beer dropped a keg on your toes. A sweetness and a delicate richness was cannoned into the back of the net with a refreshing sour bang before apologising for itself with a smoothing crisp finish. This one had the room wondering what Brendan could possibly do to top that. 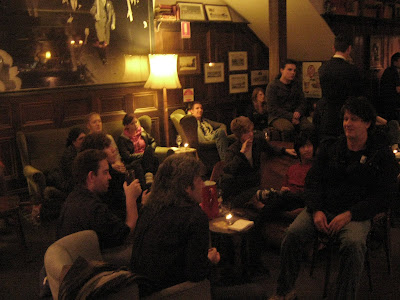 The Belgian IPA was the beer that went into the night as ‘John Doe’ and came out the other side with a name that incorporated the arduous sea voyage (through raging seas) and the Belgian people who have given us so many beer styles (the Flemish) to become Raging Flem. I can’t thank Brendan and his team enough for choosing my offering. If you ever get this one into bottles, I’ve designed a label as well. The beer itself was well worthy of carrying such a vivid title as it had everything. Depth and character and enough flavour, aroma and bitterness all tightly bundled and perfectly balanced to thrill even the fussiest Hop Head. 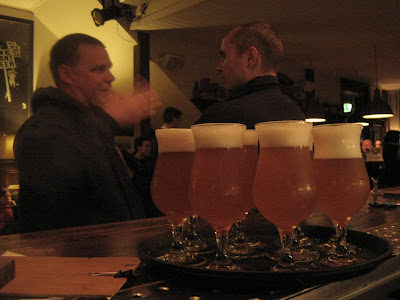 For those yet to be convinced, we finished with the Hop Hog IPA, just to cleanse the palate. Brendan was one of Ale Stars most popular hosts to date, although the fact that the winning trivia team consisted of his wife, business partner, chef and our own Big Kelv might cast a small shadow on his integrity. To be fair, though, I reckon they were good enough with their team name alone to win it. In keeping with the ‘Feral’ theme of the night they went with ‘Frankston, Saturday Night’.

This Ale Stars was anything but Feral, considering the size of the crowd and I reckon it’s a good thing that the Tech Foul Bell is rarely required to keep things from becoming ‘nerdy’. However, with the general buzz and hum that seventy people drinking four full sized beers of around 7% or so can generate, we probably need to keep the bell but rename it the Shut The F&#K Up bell.

The very approachable and affable nature of the brewers who come along and the punters who support it (members now numbering mid 40s) combined with the organisation and flair with which the Taphouse crew keep everything ticking and, of course, the wonderful host, Shandy, means that Ale Stars can probably keep growing and generating a vibrant tempo the night without ending up eating itself.

Although, Steve, Justin and Guy, just an observation – seventy people, four full size beers each, all served from the keg; poor Bec was working like a one-armed Beirut bricklayer pumping out so many beers so efficiently, so quickly and so ... single-handedly! But her something nice, would you? 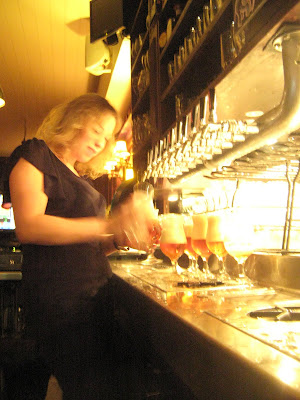 As the Ale Stars concept continues to grow and word spreads, I hope other venues can look at doing something similar. Either that, or we need to build a few more Taphouses. Any danger of siting one a little closer than an hour away from my place? Just asking.

Being good at trivia is not always about knowing all the answers... sometimes its about being smart enough to pick the best team! :)

Nice philosophy Kelv - it almost makes me want to share my Russian River specials with you!
Almost.