A long weekend is either a Godsend or a curse when it comes to running a restaurant. In some regions it is a rare opportunity to fill the dining room once or twice extra or it is an opportunity for the town to pack up and head off for three or four days and leave the town empty.

Berwick, the little village township in the centre of a massive sprawling suburban development wherein sits the restaurant I manage, can easily be one or the other. Some long weekends sees it left a ghost town and the next we are knocking back enough bookings to fill the joint twice. So it was with a fair bit of convincing that I encouraged the boss man to let me host an Australia/New Zealand themed Beer Dinner on the Friday of the ANZAC Day weekend.

And I’m glad we did. We not only filled the dining room with happy punters looking forward to some friendly beer-flavoured rivalry but we were also pleased to receive the feedback from them that it was great to have something nice to do when you’re not going away for the weekend. And something nice - and very beery – is just what we gave them. The trend towards food and beer matching is gaining momentum and I have seen the general level of interest grow particularly over the last two or so years. At The Courthouse restaurant we have dabbled in various areas of matching and we have often listed recommended beer styles that might pair well with a dish and we have attempted to use beer as an ingredient on special occasions. With this beer dinner we decided it was time to take it up a notch.

We started with a beer damper, using Cooper’s Sparkling Ale, as a starter which went down a treat and we followed this with a dish of Chicken a La Bier using Gosser Dark Ale in place of stock. These dishes were paired with a Mountain Goat Steam Ale and Bridge Road Brewers Australian Ale respectively.

The main course of very Australian and Kiwi Lamb on mash was matched with two mystery beers. The diners knew only that one was a NZ craft offering and the other a similarly styled Australian. Introduced as Left Beer and Right Beer, they were then asked to try each beer against the food and nominate their favourite without the restrictions of nationalistic preference. In a fairly close run thing, NZ’s Epic Pale Ale was pipped by The Flying Horse Brewery’s Whale Ale by a handful of votes. Fortunately for me and the chef, all agreed the beers matched beautifully with the lamb.

The crowning glory, and fitting tribute to the Skippies and the Kiwis both, was a Cascade Stout Ice Cream sandwiched between two ANZAC biscuits and paired with a Dux Brewery Sou’wester Stout. I had tried the ice cream while at the Cascade Brewery last month and was unashamedly happy to rip it right off – with the appropriate acknowledgement of course – and make my own version. So popular was it that you will now find a similar offering on our menu. 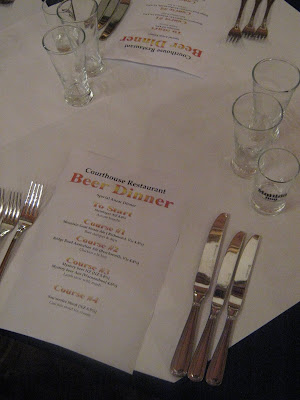 It was very pleasing to see plenty of regulars returning but also as many newcomers which gives me a good feeling about the future of craft beer at the grass roots level. If we can keep offering good products in the form of Beer Dinners, tastings and showcases, then slowly but surely we can keep the momentum and grow the industry.

I usually mention, before, during and after these events, that beer never ceases to amaze me and throw up nice surprises at every turn. Imagine my surprise when I was talking up the virtues of Red Hill Brewery and their estate grown and dried hops when one of the guests introduced himself as David and Karen’s next door neighbour and the bloke who, in fact, dries the brewery’s hops in his apple drying kit! And as much as he loved my Stout ice cream, so too am I looking forward to trying his ‘honeycomb-like’ dehydrated ice cream. If we can combine the drying of the ice cream WITH Red Hill’s Imperial Stout ... hmmm?

Nice one! hope to make it to next one. Better half had a shot at making stout ice cream - used Guinness (in longneck). Rough, but yummy in a similar way to green tea ice cream!