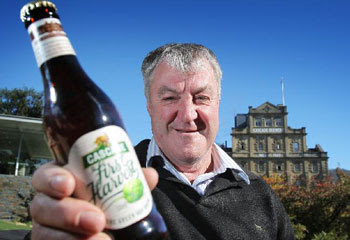 
In another long awaited instalment of “I can’t believe it’s not a beer review” today we look at Cascade First Harvest Ale. For those like me who like a good hoppy beer, this is a much anticipated limited release beer.

Made using green (fresh and undried) hops added by hand to the kettle during the boil this beer is packed with aroma and flavour. But don’t think that you know what this one tastes like because the beauty of the First Harvest lies as much in the fact that new hop varieties are employed each year as it does in it’s brewing pedigree.

This year three experimental varieties have been used and don’t let this put you off either. The First Harvest Ale was the beer that introduced the previously unknown Galaxy hop to the Australian drinker – and that hop has certainly found its way into more than a few beers since then. The Bushy Park hop farm again provided the goods for this, the eighth release of the First Harvest.

Named after prominent historical figures (well, prominent if you’re special category is Prominent historical figures involved in hop growing in Tasmania’s early settlement) Clarke, Shoobridge and Francomb. For those playing at home, the correct answers are; Richard Clarke who grew the first hops in Tasmania and was the state’s first brewer, Ebenezer Shoobridge (no, I’m not making this up) Derwent Valley hop grower and the Huon Valley’s hop growing Francomb family.

These hops are added within hours of being picked and are added in stages to the kettle to ensure the bitterness, aroma and flavour characteristics are best showcased. The result is a big, bold hop-packed but malt balanced beer with a freshness of hop flavour that comes across as slightly tart but keeps itself in check through to the last sip. And this really is one for sipping!

Definitely one for the hop heads!

Sounds excellent! Cascade is a great hop, I'd love to try a fresh hopped beer made with it.

I'm really liking single hop beers at the moment, they are a great way to show off the individual quality of a particular hop. Bring on more of them, I say!

Just to clear up the confusion, Cascade is the brewery (around since 1823ish and now owned by Foster's)and, suprisingly perhaps, have not used the Cascade hop before!

As far as 'single hop' beers go, we have had nothing but Pride of Ringwood in nearly every sngle mainstream Australian lager since the day dot! At least with the rise of craft brewers we are now seeing some showcasing of new varieties and blends, with more listing of hop type on the labels so that comparison is easier.

You've inspired me to look out for some single hop beers now - I'm guessing Brew Dog might be into it?

Aaahh, I saw this as a single hop beer! My mistake!

BrewDog do Chaos Theory (7% IPA) and Devine Rebel (barley wine) which are single hop. Chaos uses the glorious Nelson Sauvin and is excellent. Devine is less of a hop bomb so not the best for a hop showcase.

Mikkeller do a whole range of single hop IPAs which are really in-your-face and excellent. Can you get Mikkeller beers?

The very good beer people at Cloudwine Cellars have been (I think) the only ones to import Mikkeller and I must get off my arse and pay a visit soon. It's also the only place that I've been able to find Brew Dog along with Sword's Select. Small beginnings but it's a start.

I might fire of an e-mail to you to get some opinions on some of the beers you've posted about that we can't get here yet (Dark Star, Thornbridge) and see if we can generate some support.