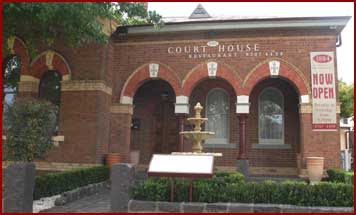 Beer lovers in outer Melbourne will have the opportunity get a bit of a feel for what those closer to town have been enjoying for a while when The Courthouse Restaurant in Berwick hosts it’s next beer dinner on Friday June 12.

Set in the beautifully original 1884 Magistrate’s courthouse – but now with INDOOR TOILETS!! – the restaurant is owned and run by Tim O’Brien (Tim O), an old mate who knows a bit about beer, having drunk plenty of it and used it in his dishes as well over the years. He looks after the kitchen and employs another top bloke to run things front of house. This bloke knows plenty about beer having also drunk plenty of it but also as a result of spending plenty of time out at The Local Taphouse around Ale Stars time each month. He is also a very fair hand at beer trivia and, some say, really quite handsome.

The Beer Dinners at The Courthouse are a real occasion which combine four or five courses with five or six different beers along with a very entertaining and informative guide through both with a very entertaining and informative (did I mention handsome?) host. And this all takes place in an elegant setting in either the main courtroom dining area or the private judge’s chambers, depending on the numbers.

This is the first dinner we have held for a while and our first effort this year will be a less formal affair than we have run previously. Five beers in a loosely formed framework of Autumn styles will be matched to a main course and several tapas style offerings which will showcase the beers and highlight the versatility of beer to match with a range of flavours.

The beers for this dinner will range from some nice refreshing starters through to full bodied and very flavoursome ales and maybe even a barley wine. For just a sly fifty you can join in the fun of this event but, as numbers are limited you will need to book early. The Courthouse Restaurant is at number 1 Gloucester Ave Berwick, right next door to the Old Berwick Post Office which is situated at the halfway mark of Berwick Village.