Masterchef Australia? I’ll drink to that! 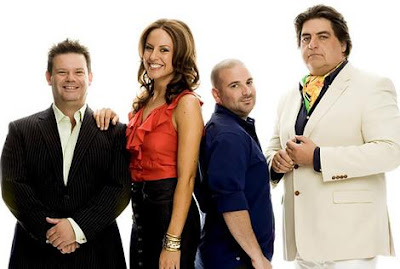 
As a restaurant manager who began his hospitality career back of house, I have watched the rise of TV cooking shows with interest. When I heard Australia was to do a home grown version of the long running BBC cooking competition*, Masterchef, I eagerly awaited the launch.

To say I was disappointed would be like saying that reality TV is about as real as Jordan’s ‘assets’. Or Peter Andre’s talent. I was very disappointed. We are about half way through the series now and I still haven’t been able to work out how they have been able to use the name Masterchef. For those not familiar with the actual Masterchef concept – here it is;

Amateur cooks compete against one another to impress the judges with a 2 or 3 course meal made from given or chosen ingredients within a set budget and time limit. It’s all about cooking. Best meal wins and goes to the next stage.

Without going the stick on Masterchef Australia, I will just say this. More cooking - less Big Brother. Or don’t call it “Masterchef”. Because that’s a different show altogether. But there is an upside. And it involves beer. Surprise!!!

Masterchef – the Drinking Game is so easy to play, you’ll wonder why you didn’t think of it. I’m wondering right now because, based on the general quality of Australian Television at the moment, I could have made a packet out of the concept. The rules are simple; get some beers, get some mates, get comfortable. Whenever the ‘Key Moments’ pop up, have a beer! Simple.

The main danger is drinking whenever George Colombaris says “Yeah?” at the end of a question/statement/story/explanation/bollocking towards a contestant. You’ll be too pissed to play by the first ad, yeah?

The other obvious danger is that, unlike the UK version, Masterchef Australia airs six nights a week. At 7 o’clock.

Actually, it’s a cracking good show after all! If only they could incorporate some cooking into the show. Hmmmm?

*For those interested, the actual ORIGINAL Masterchef concept takes the form of a kind of travelling cooking comp at fairs and shows around the country. Mrs Miggins submits her famous pies and goes up against four-time Yorkshire Regional Champion, Widow Skanky for the title of Moors Region Grand Champion. Each regional winner would then have their recipes printed together in a Masterchef Cookbook. All about the food. And the bragging rights. For the record, Mrs Miggins never accepted her defeat in the North-Western Midlands semi-final in 1923 and served twenty years hard labour over the death of Widow Skanky who ‘accidentally hit herself a hundred times across the head with a 2 gallon cast iron casserole dish then shot herself while hanging from the butcher’s shop awning’.
Posted by Beer Blokes at 15:09

Email ThisBlogThis!Share to TwitterShare to FacebookShare to Pinterest
Labels: Masterchef

7 minutes past 7 and I'm half cut already. The masterchef beer game claims its first casualty.

I replied that it was lucky he wasn't playing "George Rules", Yeah? He returned saying he was 'like his cooking - drinking for his life'. "Yeah?"