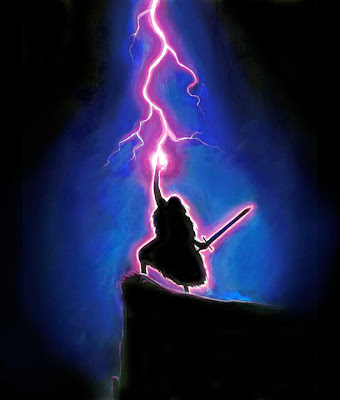 Melbourne could not have put on a more appropriate winter evening with which to welcome Shandy home from a visit to Scotland and Ireland, his suitcases bulging with Scottish Ale.

And though the crowd was smaller (if 48 can be considered small for a beer appreciation session) the felling was warming and the mood certainly jovial. Maybe all the wisecracks and smart-arsed comments just carry better on a quieter night?

Shandy was freshly returned from his holiday but jet-lag may have made it a little difficult for him to understand some of our questions and comments. In that respect it’s probably a good thing that we were sampling Scottish Ales. Simple in their promise of a nice, easy drinking malt-fronted and moderately hopped beer, Scottish Ales was a style that few knew much about.

Our first beer was a wee treat in the form of a smuggled stainless steel keg of “Highlander” ale. And, yes, due to Customs restrictions, there could be only one. Shandy related the story of the somewhat startled Customs officer who noticed the metal shape on the x-ray and, perhaps wisely, asked Shandy to remove and explain it. “Four litres of real cask ale” was all the explanation she needed, although a closer inspection may have revealed that the cask actually held five litres. Shandy’s partner had nightmare visions of her family appearing in promos for Border Security before, thankfully, they were allowed through.

And it was lucky for us as well because this tin of ale was really pretty good. Enough hop character to appeal to the mature palate and gentle enough in natural carbonation to give us a genuine taste of real ale. The only drawback was that, by the time Justin had very carefully and skilfully decanted enough glasses for everyone and Shandy asked if we all had a glass, all but the last three people served could answer affirmatively as the other 45 had downed theirs in the meantime.

A little slower to tackle was our next beer, the Innes & Gunn Original. In contrast to the light flavours of the first ale, the I&G sang from the rooftops with aromas of vanilla and malt and a dash of Scotch Whisky. A warming alcohol warmth finished the taste profile and it certainly changed opinions on just what a Scottish Ale could be.

A local offering was next in the form of True South’s Wee Jimmy Scotch Ale. A wee heavy style (a name which harks back to the days of naming Scottish beers by the tax paid on them) this beer became better as it went on. Perhaps a bit cold to begin with, patience was rewarded and the flavour and depth became more apparent.

Our next beer was a Brew Dog Paradox Isle of Arran – a barrel aged Russian Imperial Stout and guaranteed to smash any remaining apprehensions about the quality of Scottish beers. Most Ale Stars were familiar with Brew Dog (it’s not like they hide their light under a wee bushel!) but few had tried many of their challenging brews. Plenty of flavour and whisky notes and coffee hints and chocolate and nuttiness and a few other descriptors I can’t recall right now and the room was divided as to whether or not this one was a winner.

A Belgian interpretation of a Scotch Ale to finish? Why not! Brasserie s’Achouffe Mc Chouffe, an 8% wee heavy had the Ale Stars sipping cautiously with most finding it quite agreeable. Most were of the opinion that the two Wee Heavies should probably gone together, leaving the Imperial Stout to finish. A now-weary Shandy didn’t have the energy to argue and the room, as a group, kindly assured him that, yes, he had f*&$’d up and that he should just get over it and move on. If your friends can’t bag you mercilessly then who can?

Trivia had a distinctly Scottish bent with bonus points awarded to the teams with the names ‘Shandy’s Mum, Glasgow Kiss, Scotch Crotch and my personal favourite which summed up the rich and broad traditions of Scottish culture; ‘Hee yoo Jimma ya wee cheap ranga Bastard, yoo wann-ee fight!?!’

A somewhat subdued version of Ale Stars then closed with most staying for a few wee afters while others moved upstairs as, apparently, there is some soccerball tournament being played somewhere or other at the moment.

I'm sure the accent helped with “Four litres of real cask ale”.

I prefer the Tokyo to Paradox....

I'm guessing that a wee baldy pasty-faced Scotsman was more 'humerous' than 'terrorist'!

I'm a bit partial to the Smokehead myself.