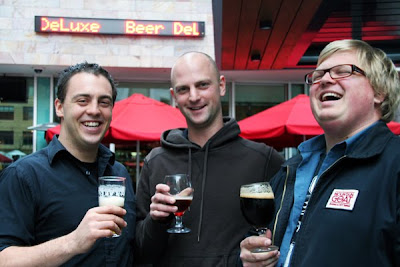 Over the past few years as my passion for, and knowledge of beer has grown I have been described as an ambassador for craft beer. I’ve worn that proudly – until June 6 this year when four intrepid beer adventurers took off on a diplomatic mission that puts my efforts in the shade.

Barney Matthews and Miro Bellini of Melbourne beer Meccah, Beer Deluxe and “Road Goat” Tom Delmont from Mountain Goat along with a London based tech expert Jason Duffett are attempting to visit thirty breweries in 30 days and sample 300 beers. And why not!?

Beginning in LA and sipping their merry way across the States from Coast to Coast, they are currently in upstate New York and their adventures are well worth following. I have slipped a link to the Beer Ambassadors site at the right of the blog. Follow the journey and leave a comment for the boys – they might even get interactive and visit places you recommend ... but don’t bet your house on that!

Thanks to James Smith for the pic of the boys which comes from his very good and soon to be released website, the Crafty Pint.
Posted by Beer Blokes at 10:37

I am so jealous right now!