By way of wishing this blogs co-creator and technical advisor a happy birthday, I hooked an extra ticket for him to The Local Taphouse’s Ale Stars event on Tuesday gone. That was as good an excuse for getting out there mid week as I could think of and, having arranged a late pass for him from Mrs Lager we headed out for a night of German Celebration beers.

The brother-in-law had beaten us there by 20 minutes or so because A; He lives a lot closer than we do, B; Part of the birthday gift involved me picking the Dr up from his place and C; He likes to get in a ‘sneaky’ before we arrive.

As I explained in a previous post, Ale Stars is a very casual social event for beer people to get together and drink beer and talk about beer and then, when it’s finished, you stay around and drink beer. And talk about beer for a bit more. All very simple and civilised. With October approaching, the theme for this session was (loosely) Oktoberfest, Marzen and Vienna beers.

We began the evening with a Samuel Adams Boston Lager. Actually, we began with a ‘disclaimer’ from our affable and very able host, Shandy, who explained that not all our evening’s beers would be necessarily true to the originally advertised theme of ‘German Celebration Beers’. Despite the hitch, the Sam Adams being a Vienna style lager fitted into both the theme and the throat very nicely.

Next up was the Weihenstephaner Festbier. Readers of this blog will know that I am extremely very partial to a Weihenstephaner or three on as many occasions I can talk myself into. The Festbier was a surprise to many there on the night as it poured a very pale ‘Munich Helles’ gold which seemed to belie it’s 5.8% alcohol pitch. The taste also hid the alcohol level well and the slight sweetness balanced the crispness of the hops and our group agreed that this was certainly a beer to celebrate with – even if the celebration was simply the fact that you had a Festbier in your hand. I was a big fan, though not to the same extent as Shandy who, in his wee Scottish brogue declared it ‘the dawg’s dunglers’ (which translated into English is ‘the dog’s danglers, or bollocks and translated into beerspeak is ‘this beer is a good one’) On second thoughts, I agree!


An Erdinger Oktoberfest Weisbier was the next sample and this one presented as a beer that seemed a little darker than a wheat beer would normally be, yet this in no way detracted from its appeal. The classic banana/bubblegum yeast aroma sat nicely on top of a lightly sweet and beautifully balanced tart tanginess which sang out, ‘celebrate’.

To say that the last beer of the session was a ‘smokey’ was to say that Paris Hilton likes a camera or that Collingwood footballers like a drink after a game. To say it was a ‘smokey’ was also vey accurate and for those who had not tried a Rauchbier before, smokey was just what they got. Schlenkerla Marzen is a beer flavoured through the addition of woodchips to the grain malting process which imparts a really intense smoke flavour into the finished brew. And when I say smoke I mean smoke. The brother-in-law likened it thus; “I declare, my fellows, that If I didn’t know better, I would swear upon a stack that someone has put upon my beer a large portion of smoky bacon!”

Just trying to imagine having this beer alongside a dish of chorizo and scallops with braised fennel sent the inner chef into a frenzy of recipe based anticipation. The flavour is undeniably brash but somehow it melds seamlessly with the overall flavour of the beer – which is beery enough to carry it. It is warm and rounded and, in case I forgot to mention it, very smokey.

A quick show of hands revealed that only one in the room could say that they really hadn’t enjoyed it. This beer is one which Shandy expected to polarise the group moreso. I guess this means that either everyone there had a fairly broad beer palate or no one there was game to admit to not liking it bar one! I can say I was really surprised at the extent to which I enjoyed it, and look forward to the ‘correct drinking procedure’ for this beer as outlined by Shady – ‘It gets good around the sixth or seventh pint’. That’s a lot of bacon.

Again a terrific night for beer people of all ages, tastes and beery experiences. The next Ale Stars is October 21 when we will treat ourselves to Farmhouse Ales, the Profs favourite craft brewer, Ben Krauss from Bridge Road Brewers, good food and good company. 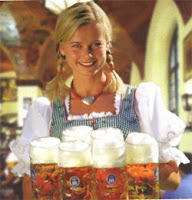 Thanks Lee,
Yes, I have stumbled across the fine work on display there! Always a good place to stop off at when I forget what it is I like so much aout beer!!
Cheers,
PP