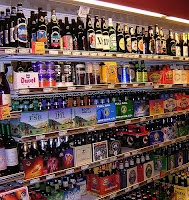 I watched a special on the telly last week which dealt with the retail duopoly which exists across Australia in the supermarket sector. The two big players, Coles and Woolworths sell us 70% of our dry goods and 50% of our fresh food as well as having a massive stake in petrol stations, pokie clubs and other businesses.

Where a decade or so back these supermarkets were selling just tinned tomatoes, milk, frozen peas and washing powders, they have now expanded and in many places have edged out small local butchers, bakers and probably the odd candlestick maker as well.

The other area of interest for visitors to this blog is that the two mega retailers also control a fair sized slab of the liquor market. With stores dotted everywhere across the city and country making use of massive floor spaces, the buying power that these giants have is unbeatable. Huge volumes and the ability to showcase hundreds of different lines means that the big two can dictate terms and pricing from the various suppliers. If you want to move a shed load of product, here’s how much you will get per unit and here’s when and how you’ll get paid.

For the humble punter this means a few things. First, we get to choose from a range we have not had ever before. Second, we can take advantage of bulk buy discounts and weekly specials on everyday mainstream beers – especially by the slab. Third, we are generally paying a lot less overall for beer because the biggies will always price beat their smaller independent retailers. And fourth, with liquor departments at the supermarkets as well as the huge stand alone booze barns access to liquor is easier than ever before. But is this all a good thing?

Having two players in the market effectively setting the price of beer means that the small independent is pretty much at the mercy of the duopoly when it comes to competing on price alone. The 4 Corners special heard from some retailers who were actually buying their stock from one of the bigg’uns because their cost price from the brewery was more expensive than the giant’s retail sale price! Some may argue that the small retailers offer a better level of service but for the average shmo trollying out his week’s supply of ‘Good Piss Lager’ or a slab of bourbon and cola cans, he could care less about service and range.

For those like myself, I prefer to shop at my friendly small guy (see entries on Cloudwine and Swords Select) because I know I can get a chat as well as a better selection of hard to get beers and special orders are taken care of with pleasure rather than annoyance. Personally, I can also request an odd-ball import or check prices and upcoming new arrivals on the beer retailer’s blogs. These things are more important to me than knowing I can get four ‘torpedoes’ of no-name bourbon flavoured rubbing alcohol mixed with sugar and cola infused lab syrup for around the price of four really nice beers. Plus, I wear shoes when I go shopping for drink and I don’t tip half of my purchase down my neck on the way home. But that’s another story.

Here is the big question; two mega-ginormous retailers controlling the market, keeping the smaller players at arms length from competing and calling the shots to the suppliers – what happens next? If more and more independents fall by the wayside and the big just get bigger, do the leaders go all ‘soup Nazi’ on us and say; “No specials for you!!” or does the fact that there are still two players at the top of ladder ensure that neither wants to shake he ladder or risk cutting some rungs? In the UK the supermarket players are being blamed in part for the decline in patronage at traditional English pubs and while the situation is different in the way that pub drinkers buy their booze, the omens are there.

We have more choice and more variety and more opportunity to easily buy what we want. We are probably paying less overall for many garden variety beers. We are convinced by the marketing that we are getting the best value for our drinking dollar. Should we just enjoy it all while we can or do the signs point to a future where the rules surrounding the business of buying beer is determined by the retailer and not the customer?

I’m off to buy some beer and I will drink some and have a think about it. I’ll get back to you soon.