To those of a delicate disposition, I suggest you look away now. As if this blog attracts anyone with a delicate disposition. Just n case, I thought I should be forward upfront. You know what I mean. Just in case there are any wimps, nancy-boys, wee jessies or easily offended Poindexters still hanging around;

Bollocks. Nads. Cohones*. Plums. The Boys. Danglers (thanks Shandy). Jibbies. Balls. These are all words used to describe those manly elements that we all hold dear. Men, I mean. We hold them dear. Often in inappropriate social and work situations but that’s not for here. These are those things that never sit right when you want them to and which even the Good Lord felt so awkward looking at that he decided to hide them in some leftover elbow skin he had lying around on the workshop bench. Today we must address some distressing news.

New research suggests that a naturally occurring plant compound found in many foods is lowering men’s sperm count. It actually said men’s sperm. Hmmm. This chemical is some sort of phyto-estrogen and is found in higher levels than previously thought in foods like coffee and nuts and – horrifyingly – beer. BEER!!

Now it doesn’t specify which beer and I am sure that each of you is doing the same thing as I am and inserting your favourite ‘poofter’ beer at this point and saying stuff like; “I told you that shit was a girly drop!” but this is more serious than that. As beer drinkers we need to get proactive on this. Imagine if this report gets out and beer starts getting a bad name around town as a drink which lowers your sperm count!!!

The Medical Research Council in Cambridge did this study and found high levels of this infertility causing chemical in red wine, brazil nuts and peanuts as well as beer, so we can’t even enjoy some of our favourite beer snacks, nor can we think about switching to wine! Not that we would anyway. We need to get on the front foot to tackle this threat to our beer drinking and I think I have some helpful tactics. We can tell our ladies that we need to actually increase our beer intake as we are involved n important scientific research conducted in order to determine if phyto-estrogens really do lower sperm count. We could explain our increased consumption as being the control group involved in disproving the same theory. Or, when the missus asks if you ‘have protection’, tell her; “yes, dear, a six pack full!”

And lastly, the research also found these phyto-thingies occur in high levels in soya. We can just keep drinking our beer and smile knowing that this research explains a lot about that tie-dye t-shirt wearing, whale saving, mung bean farming, tree hugging, unwashed, commune reject bloke who works in the health food shop and swears he isn’t gay.

Go out now and pick up some ‘research materials’ – at the very least we can all get lagered up, father a few offspring each and disprove science. Yay for Beer!!!!

*I don’t know if I should have spelled this one ‘cohones’ or ‘cojones’ – both might be acceptable (though rarely either in polite, Spanish or papal company) but when I tried spell check it just said ‘don’t ask me’ and when I Googled it the child lock on the laptop kicked in and I couldn’t post for two days.

P.S. Under NO CIRCUMSTANCES do I recommend you get together with your mates to 'check each other' for levels as these Spanish football-ticklers are doing. 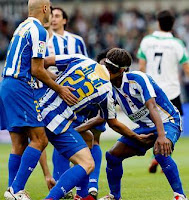