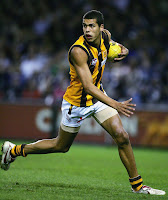 Watching my beloved Hawthorn taking on Carlton in the last of the regular season games on Saturday night and all the attention and interest in the game centred on the Hawks’
magnificent young superstar Lance ‘Buddy’ Franklin and his quest to kick the two goals needed for his hundred for the season.

The Hawks were already assured of second spot on the ladder leading into the finals series so the media focus was all about Buddy and his ton. The sub plot to this sporting drama was the fact that, at the opposite end of the ground, Carlton’s enigmatic spearhead, Brendan Fevola was aiming to kick a hefty 8 goals to get his century. I say enigmatic because ‘The Fev’ has seen more than his share of trouble over the last few years.

Seemingly hard wired towards dickheadedness, Fevola has managed to upset fans of the game and fans of normal social behaviour by getting on the drink and then choosing one or more from the following list of ‘Dickhead Things To Do When You Are Pissed’; weeing in public, headlocking barmen in Ireland, conducting an SMS affair with a vacuous model famous for being well known, speeding twenty kilometres an hour over the limit in a school zone, being a pissed idiot – you get the picture?

Anyway, Buddy dobbed the two six pointers that he needed for the ton in the first ten minutes of the game. Mrs Pilsner was commenting on the AFL tradition of fans running on to the ground as the hundredth goal went through the sticks and mobbing their hero when she mused at the prospect of Fevola kicking the eight he needed for his milestone. The commentators had made mention of the fact that, while the ton had been reached by players in the same season and even in the same round before, it had never been achieved in the same game. Could it happen tonight? How would security cope with TWO ground rushes? Would it take some of the gloss off Buddy’s feat if Fev got his as well?

“Won’t happen” I said matter of factly to Mrs Pilsner’s enquiries. “Why not”, she pondered. “Beer Karma”, I replied. “He has a poor track record when it comes to disrespecting the beer and Beer Karma will say to him – shit bloke, no ton.”

She laughed and we watched as Fevola’s Blues were pumped to the tune of 78 points and despite a goalless first half, Fevola (ably assisted by every one of his generous team mates) kicked four third quarter goals and then three in the last to finish the game stranded on 99 goals for the year. You are Beer Karma’s bitch, Brendan.

And, as if to underline the point, this morning’s paper runs the story of an AFL footballer who has again run foul of decency and standards by participating in his team’s end of season celebrations on ‘Mad Monday’ by dressing in a pink nightie, matching hat and accessorised with a sex toy to the bemusement and disgust of several city bar patrons (pun unintended). Wonder what Beer Karma has in mind for her bitch next season?

Warning; if large pink rubber dongers offend, don’t look at the front of Brendan’s pants in the picture below. 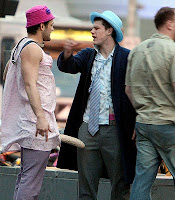 Whilst i kind of agree with the good Professor, I have two points i'd like to mate

1. Somehow, i cannot help but think that the redhead that kicked 5 in the last quarter and then played loose man in defence to stop fev from kicking the ton will feel the empty stubbie to the side of head from Beer Karma's hand at some time.

2. i believe that there are grades (or levels, if you prefer) of shit bloke. Fev is not a Malcolm Blight goal post high torp from 65 metres within the "shit bloke-ness" of others that have been mentioned by the good Professor in this blog.

1. No, he was working under the influence of Beer Karma's guiding hand and will probably kick a ton himself in the next few years - and kick his hundredth from a Fev free kick! Beer Karma has a good sense of humour that way.

2. Definitely should get around to categorising and listing the 'Order of the Shit Bloke'. Stay tuned.
PP