Beer to make you better 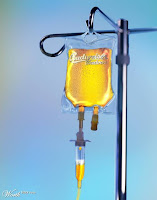 My Beer Blog Brother from across the waves, Stonch, had a bit of a tumble recently and has been laid up with a gimpy foot so I thought I might look into the recuperative powers of beer from a researched and very scientific approach. Then I realised that would be far too much like boring old hard work and I changed my mind and decided on the next best thing. Make stuff up.

We all know just how good for you beer can be. In medieval times and onwards beer was seen as a safe and tasty alternative to the dodgy local water. The British Empire was spread wide in ‘the olden days’ and India, the jewel in the imperial crown, was responsible for the invention of the India Pale Ale style. So hoppy and preserved was it that it could almost be labelled as ‘medicinal’.

So to those who are ailing, unwell, sick or just sick of it, here are my Top Beers to Top Up Your Spirits. Without resorting to spirits. Now, there are two very different types of unwelledness that we need to address from the start because one type can be cured easily with beer while the other will make you worse. The first type is the physical unwelledness – aches, sprains, strains and all manner of brain-drains. Provided that the breaks, fractures and swellings are confined to areas other than the arms and hands, self medicating is a snap.

The second type of unwelledness is not the physical but the physically sick – the dodgy guts, the Delhi Belly, Thai Typhoid and any other ailment of the insides which may enforce the opinion of your mates that you can’t hold your grog. Literally. Do not attempt to redress the liquid imbalance in your bowel by adding more. Go to bed, have one of those iced lollies that taste like Gatorade after it’s been tipped over the sweaty head of the Super bowl winning head coach and rejoin the Beer World when you stop spray painting the porcelain.

So, with that unpleasantness behind us; on to the beers. There is always something therapeutic about porters and stouts and since Stonch is in England I will assume he has access to plenty and better than I could offer and we shall move on.

Any Belgian Abbey ale with enough alcohol by volume to disable a small mule will generally do the trick as far as numbing aches goes and if you are taking that particular course then you may as well seek out one that doesn’t kick like a mule all the way down. Red Hill Temptation has some very warming and comforting notes wrapped in a beautiful looking beer and the 8% alcohol makes you feel like you are getting that mule to kick the pain. In the arse.

Another favourite of mine when I am feeling poorly is a Weihenstephaner. Any of them, really but a Dunkel or a Korbinian would probably have more approval from a doctor because they look more ‘mediciney’ and that might trick your brain into thinking that this stuff in the glass may actually cure you. Unless the thing that needs curing is in fact your brain in which case you might be in a bit more strife than I can help you out of.

Have I pointed out before this point that I am not a real medical professional in any way and I don’t expect anybody to take this as real medical advice? Good. My last suggestion is to try mixing your alcohol with your medication as I seem to remember something about these two elements being taken together. The advice also had something to do with the operation of heavy industrial machinery but since the reason you are mixing beer and codeine is that you are injured, I guess you don’t have to worry too much about work so just go for it.

Stonch, hope you are up and about soon and that this advice has been as helpful as it has been inane. If pain persists, take two Beck’s and call me in the morning. Except that ‘morning’ for you is very late for me, so, on second thoughts just have another instead.

Cheers,
Prof. Pilsner
(Not a real doctor)
Posted by Beer Blokes at 11:25