Ale Stars was a ‘Bell Ringer’ 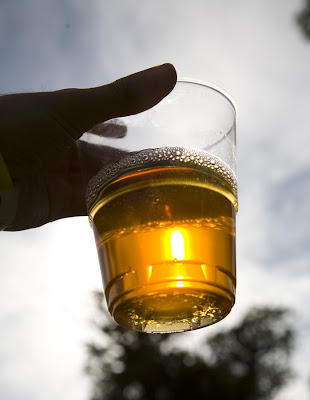 I’ve always believed that beer people are the best people. You can get a whole bunch of them together, give them all a few beers, start a conversation, let it run unchecked and just sit back and enjoy the show.

Such was the case at last nights’ fifth instalment of Ale Stars at The Local Taphouse. Rather than a ‘show and tell’ by a guest brewer, Ale Stars tends to lean more towards a ‘Q&A’ style forum with input welcome and answers rarely technical. But, when the boss shifts the focus from the ‘informative’ to the ‘interactive’ and the room is filled with passionate beer lovers and a couple of brewers, there really is very little room left for quiet contemplation of your beer.

Wheat beers were on show this time around and Shandy had his hands full just trying to get a hold of the promised beers as well as contending with a spot of ill health. One of the beers failed to materialise, but the man’s health seemed to improve with each sample! As always, Shandy’s knowledge, coupled with his ability to share it in an easily understandable language, made for a well paced journey through the five different wheat beers.

Neil from Matilda Bay Brewing was on hand to present the first beer of the night, the award winning and ground breaking Kristalweizen, Redback. Laid back and not taking himself too seriously, the man mirrored the beer. A nice easy going wheat beer, Redback was the beer which made Australians aware of both wheat beers and craft brewing, although I think we still called them ‘boutique brewers’ back then. A brief history of the style was followed by a brief history of both Redback and craft brewing over the last 20 odd years.

A Weihenstephaner Hefeweissbier and Vitus followed quickly and along with the increase in ABV made some of us question the wisdom in arriving early for a couple of sneaky upstairs beers. The conversation travelled quickly and, courtesy of some knowledgeable input from accomplished brewer AG in the comfy seats, question soon turned to lively debate as styles and marketing and independence was discussed in a fun and lively manner. When the debate is about beer, it seems that no opinion is shot down and all comments get a fair hearing.

Now, I mentioned earlier that these gigs rarely get technical, except to clarify the odd brewing process or to describe a profile element of a certain beer, and even then the tech talk is fairly tame. But you will also remember that I commented that Steve, one of the Taphouse owners was looking for more group discussion. Well, he got it and then some – to the point where he has now decided that for the next Ale Stars meet, a ‘tech bell’ will be employed to ‘call Shenanigans’ on anyone who gets too tech-tossy with either the questions or the answers! Fellow Taphouse partner Guy might want to argue the toss as he was responsible for most of the science lesson last night!

A Hoegaarden Grand Cru was due to draw the curtain on the night but Neil and his generous masters had a sneaky beer of their own with which too further dent the spirits of those who drew the short straw and had to drive. Yeah, thanks guys. A Sebastian Reserve Dunkel capped off the night with something a little different and special. And for those wondering, yes, Sebastian is named after a pet duck. Of course. And in case I wasn’t pissed off enough at having to go steady on the amber, Steve finishes the night officially by shouting every Ale Star with a Christmas Thank You beer!! Yeah, Thank You!!!

But I don’t want to give the impression that I was at all disappointed. Ale Stars is a sensational concept for beer people. Never taking itself too seriously, open to all and informative as well as entertaining, this exBEERience, if you will, is a great opportunity for the average punter (and there are plenty of ‘average’ punters on hand – hello to Dr Lager) to talk beer, drink beer and bend the ear of other beer lovers and brewers alike. I suspect it is also a great chance for the brewers to see the satisfaction that the fruits of their labours give to the end consumer. Speaking to Neil afterwards I can attest to the fact that he was surprised by the passion and the interest in the room and pleased that he was able to contribute to what most agree was the most enjoyable Ale Stars so far.

To Shandy, thanks again for a magnificently casual professionalism in hosting the night, to Steve, Guy and Justin likewise for a great concept perfectly delivered and to Bec and the staff a big thanks for the friendly service of the beers and the food. And, as always, a huge shout-out to the Ale Stars themselves for the support we all give the concept and the growth that this night seems to enjoy from each previous meeting. An hour or so after the event a handful of insightful conversations around the bar were winding down and I could write ten posts with just the chat I had with AG, Shandy, Steve and Neil!

As the pumpkin hour approached and we realised, yet again, that we were left holding up the bar with AG and Shandy, we reluctantly trudged off into the cool Melbourne night filled with the warm glow of wheat beer, good company and a gutful of giggles to look forward to the next instalment.

The next, by the way is scheduled for January 22. BYO tech bell.