Do as you are told 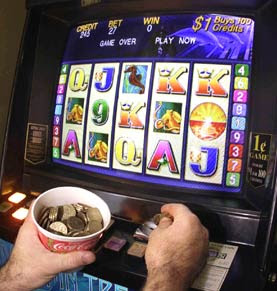 So you need to kick start the economy because, well, I don’t know why, something to do with someone in the U.S. lending money to someone and then they couldn’t pay it back and so the whole world economy caves in on itself – seems logical enough, I guess. What’s the solution? Pokies!!!

The federal government recently decided that, because everybody in the whole wide world was spending too much money that the didn’t actually have, we could easily solve the problem by making them spend money that they did actually have, and the best way to make sure that they had the money was to give it to them and the way to ensure that they spent it was to give to them in the weeks before Christmas, and the way to make doubly sure it got spent was to give it to people who would just get a bit giddy at the thought of heading straight out and wasting it.

So a little Christmas present, in the form of between $500 and $1400 was posted out to all the pensioners, low income earners and some people with kids with strict instructions to get it out there into the economy and, whatever you do, don’t save it or put it in the bank but don’t waste it, OK? Promise? Good, off you go!

The result? We know have a new ‘feast day’ in Australia and it’s called ‘Rudd Thursday’. Named by the Hotel Association because the day that the cheques arrived in the mail was the day that literally millions of extra dollars were pumped into pubs and clubs around the country – into poker machines! Now that’s the way to get the economy back on an even keel.

The cynic may even suggest that this is the very result that the Government was looking to achieve. Look good by playing ‘Robin Hood’ for Christmas, get them to spend it on the pokies and we get a shitload of it back in tax!

And still decent people who are out there producing real craft beer are being taxed in the same way as the big multinational beer barons. Makes you think, doesn’t it?

Rudd and his governement have learned nothing from history. Giving away budget surplus has the same effect on the economy as printing more money and will just result in a rise in inflation once the recession is realised.

G'Day Tim,
Welcome back! Hope Germany was a beery hoot. Yeah, it seems a good case for giving people vouchers or paying off their gas bill but I guess this was an easier option. I'm just amazed that anyone would think that you could give a cash hand-out to a pokie Granny and think that she'd do anything but stick it in the slot!
Cheers
PP