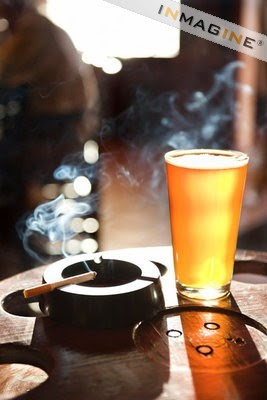 Had to share this one with you. I never realised the solution was so simple. This letter to the editor comes from the Herald Sun in Melbourne on Thursday December 11. I laughed.

“KEEP THE SMOKERS INSIDE”

‘Has anyone noticed that street violence has increased with the changes to smoking laws in clubs? Patrons are forced on to the streets to smoke, causing all these problems.
The police and Government need to look into this matter as I believe this is a major factor in the problem’.
Jenny Denko, Sunbury.

I’m not sure where to begin so I will compose my thoughts while chanting ....

OK; Smokers are not ‘forced’ to do anything, they choose to smoke while at the venue and smoking is rightly allowed only outside. Smokers are not being violent because they smoke are they? I have not seen that warning on a pack yet. The police and Government can’t ‘look into this matter’ because they are too busy dealing with the idiot actions of people like you who are incapable of walking and talking at the same time. Oh, by the way, you must be as thick as a whale omelette to believe what you said. Meanwhile, here’s a reply I’d like to see.

“Stoopid is as stoopid does”.
Forrest Gumps’ Mama