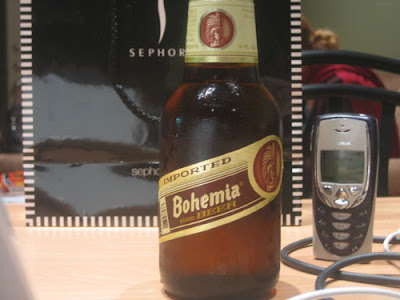 I met another beer guy in the restaurant on the weekend and he had an enquiry about a Mexican beer called Mexican Bohemia. I hadn’t heard of it and so I promised that I would set my dogs on to it and chase down the details. More than that, I promised that I would get word out to my American blog mates and see if I could get the REAL scoop on this brew. Isn’t the internet thingy great!?!

The source and supplier websites all talk about what a highly sought after and multi-award winning beer Mexican Bohemia is and I never expected anything other than that and so we shall move on. A few beer blogger sites have some glowing remarks to recommend it and others tell me which beers they prefer to this one.

All the comments seem to suggest that the beers best feature is its ‘European-ness’ and the fact that it has been around for a hundred years. Apparently imported into Australia since at least January 08, it has been available only in Mexican restaurants and occasionally through some retailers. I imagine most have steered clear due to the saturation of the Mex beer market by Corona and Sol and, more recently, by Dos Equis.

So the cry for help goes out to my North American bretheren – and any Mexicans who may have stumbled across the worldwide beery phenomenon that is Beer Blokes. What is the true story of his fabled brew? Who drinks it and when?

Thanks for your interest, Aaron. The beer world is getting smaller and smaller and the answers should come in shortly. Otherwise we’ll both have to go with company line that it is a truly international standard Pilsner style but ‘rich in hops and corn’ and ‘a delight to drink’.

I've never thought it was a particularly good beer. Better than Corona I guess. The European connection is that German brewers went to Mexico a in the 19th century and brewed German-style lagers there. Negra Modelo is another.

Obscure movie reference: in Sam Peckinpah's Bring Me the Head of Alfredo Garcia, there's a scene where the main character explains all this.

Thanks Buttle, Knew I could count on you - the obscure movie ref was a bonus!- I'm not sure why they are looking to Australia for sales as I don't think they'll compete with the Corona Empire. I can't explain that one, either!