And Amy Winehouse can be your anti drugs campaigner 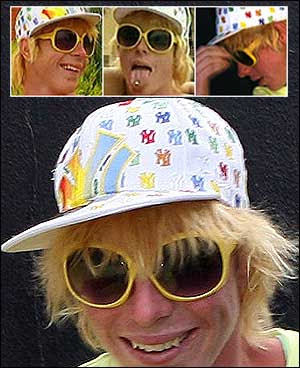 A quick follow up to a story from last year when a local Gen Y’er named Corey made the headlines for running a little party at home that got well out of hand after the internet was used to ‘advertise’ the event.

Corey copped all sorts of flak – mainly because instead of apologising or showing remorse, he spoke to any media outlet that would show up and eventually became a caricature of himself. And a dickhead, though I suspect he already had that art mastered. Anyway, Corey got himself an ‘agent’ or a ‘manager’ (maybe a ‘parent’ might have been more useful) and tried to make a career out of being a tool. A couple of unsuccessful nightclub appearances (Geez, you’re even more of a dickhead up close!) and even less successful attempts at hosting parties for other dickheads, and Corey faded away. Until last week.

Clearly unimpressed with Corey’s earnings, his manager offered him up as a consultant to the Premier, John Brumby, who is not a million miles away from Corey when it comes to arse-brained schemes. His latest effort to quell the growing problem of out-of-control youth is to declare war on the ‘me’ generation and demand of them respect. On Friday the Premier released a plan “to restore respect throughout schools and the community”. “I am concerned about an emerging culture of alcohol and a lack of respect,” the Premier said, presumably keeping a straight face the whole time.

Mr Brumby plans a multi million dollar campaign to steer young Victorians into volunteering for key fire, rescue, welfare and community groups and to ‘change the school curriculum to teach teenagers right from wrong’. Quote, unquote. A million dollar campaign to teach right from wrong? How about a nil dollar plan to back the police when they send these dumbarse little scrotes to court and they get a pat on the back and a ‘try not to do it again’ from the do-goody, namby-pamby, social engineering judges? Or allow the coppers to have a stern word with the mouthy little wankers when, at age 8 – 12 they begin their anti-social antics and thumb their noses at the law?

So Corey is going to offer the boss his advice on promoting respect and controlling the violence perpetrated by so many of today’s youth. “They need to be entertained or have places to go so that they aren’t on the streets where the violence occurs,” Corey said. In a written statement from his manager, obviously, so that the spelling could be corrected and the crayon smudges erased. Of course these days kids just don’t have anything entertaining in this technology-deprived, under age nightclub banned, internet free ‘prison’ of a society, do they? Shit, twenty years ago we thought the space age had arrived when Atari brought out their new state of the art follow up game! This is way better than Pong!!

Corey also suggested street parties, concerts and relaxing laws so some licensed venues could be used for under 18s events. Cos there just aren’t any parties, concerts or nightclubs around, are there? Dickhead. The Premier, on the other hand, wants troublesome youth to volunteer for emergency services like the SES and the CFA because what we really need is Dickheads assisting in the extrication of other Dickheads from crashed cars or putting out fires lit by bored and mindless Dickheads. To be fair, the Government hasn’t asked for Corey’s ideas, he’s just offered them up, but what’s next?

Maybe we could get Paris Hilton to advise on celibacy, or Shane Warne could head up the Culture and Arts department? Ronald McDonald could be your childhood obesity advisor, Drunken ‘Schoolies’ could draught retail alcohol legislation and Baz Luhrman could make ads for the tourism commission!! Crazy stuff!!