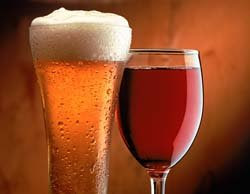 I guess more people read this thing than I thought. Last month I spoke of the dip in numbers at Ale Stars at The Local Taphouse compared to the previous session. By way of comparison I said it was like the difference between a cousin’s wedding and a quiet family dinner. Well, this month the WHOLE FAMILY showed up. And everyone brought a friend along!

Not that I meant for that to sound like my blog was taking credit for bumping the numbers up! (Please imagine winking cheeky smile emoticon here)

The night was chilly and the company warm as a record number of Ale Stars showed up to sample some winter warming kind of beers. Shandy again led us through the background to the styles we tried, all the while maintaining his chipper demeanour despite the amped-up noise level that is a natural consequence of fifty plus bods all tasting and talking about beer. As well, anyone who can chat casually about craft beer while slipping terms like ‘estery enzymatic compounds’, ‘Yorkshire Square fermentation’ and ‘accidental phenolyisis’ into the conversation without getting ‘belled’ is to be congratulated. Unable to find another chance to use the descriptor ‘Calvados-y’, Shandy?

Holgate Nut Brown Ale, Lobethal Oatmeal Stout, Meantime Winter Cheer and Young’s Christmas Pudding Ale each had their fans among the Ale Stars but the Holgate seemed to get the nod as the overall favourite – accidentally good or not. Interestingly, the Young’s divided opinion more than most Ale Stars beers have and, in fact, was markedly different to the taste delivered to my very own palate at The Courthouse Restaurant Beer Dinner just the Friday before. It is not often that you hear beer descriptions like dried fruit, toffee, Bounty Bars, Malibu and Sunscreen, caramel, coconut, coffee and butterscotch popcorn (nice one Simon!) about a single beer.

As I was driving, I had to keep sensible about SUBS and ‘afters’ and this proved to be more difficult than planned. You see, Ale Stars has become as much about beer as it has about meeting up with mates and chatting. This is hard because, (A) With fifty there and most of them ‘mates’, I didn’t get time to catch up with everyone*, (B) Those I did catch up with I felt rushed, (C) You like to meet the new faces as well – especially when the host AND the owner keep referring to you during the night as either an expert or a smartarse - and (D) Catching up requires a certain level of ‘beer-in-handedness’ to be considered truly social - difficult with the prospect of a 35 minute drive home at the end of it all. Fortunately, Dr Lager was willing to assist me by staying back and downing enough ‘afters’ for both of us, giving me time to return to normal safe levels.

The trivia quiz was, again, a cracker – if by cracker I mean designed to make everybody laugh and cheer if the team I’m on doesn’t win (even if, right, it’s only by, like, ONE POINT, and like, you know, I swapped teams and tried to hide down the back right, and got over-ruled on a couple by the majority vote, right and ...) what’s important is just that everyone has fun and we all learn something about beer. and as if handicapping me isn’t enough, now they MAKE ME HOST THE NEXT ALE STARS so that I definitely can’t win the trivia if I’m reading out the questions! But seriously, good luck, Shandy and Tracey on the impending stork delivery. We will miss you next month. Despite what I’ve been telling anyone who’ll listen.

Must go, need to finish the printing of the Prof. Pilsner for Ale Star Czar how-to-vote cards. 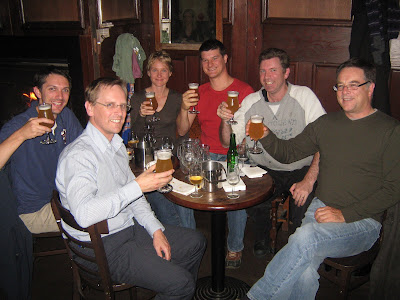 *A special mention and thank you to Reeksy and Ella for their support of Ale Stars, for their friendship over the past year and for their contributions which have made our team ALMOST unbeatable EVERY month in the trivia quiz. They are both off on a cross country adventure to see the vast Australian interior and some dodgy bits up the top of the map as well. Good luck and keep in touch. Apologies to those I didn’t get a chance to chat with on Tuesday, especially Anton and Justin-Paul, Steve and Mark, Briony, the other half of Kelv’s Crew – I didn’t mean to brush you! Promise I’ll share a beer or two next month.
Posted by Beer Blokes at 14:01

Ahhh, you big suck-up you.

I can tell that this is just to get me to send you down a Darwin stubby if I happen upon one. Well, perhaps if you can email me with the correct size of the afore-mentioned then I might give it some thought.

Shame I won't get to try a Professor Pilsener Alestars session, though... I think.

No apology required - my fault for nicking off early (not to chase the aforementioned boy, but I've got a chest infection & had to drive an hour home. ouch)

Will be there next month for some serious heckling, I call dibs on the BS bell ;)

My good god. The place is definitely getting too busy when I don't even hear news like Graham and Ella nicking off. When and for how long? Oh and if you read this Graham. Having talked about Manns brown ale I found it in Acland cellars. Very unique drop and not how I remember it but palates change and memories fade. All the best for the journey mate.

I think you'll find the Prof is a malty, soft Czech Pilsner and not a dry, bitter German Pilsener.

Nice Manns find ... did you try it? I can't even remember if I have.

We're gone for 6 months / 1 year keep something on ice for us.