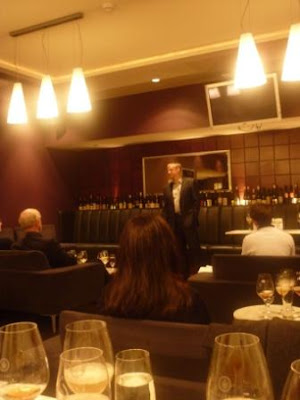 I suppose that if you manage a restaurant that offers around a hundred different beers it stands to reason that you will frequently come into contact with people who will show an interest in beer. Some of these will become more than just guests or regulars, they will become friends.

One of these rang me (from his holiday in Queensland, no less) and asked if I’d like to come as his guest to a Beer Masterclass at the RACV Club hosted by Fosters Head Brewer John Cozens and featuring tastings of, among others, the Crown Ambassador Reserve Lager – 2010. After a nano-second’s thought, I replied that I would.


The 2010 Crown Ambassador has been in the news of late and sadly not just because of its $90 price tag or because of the niche it is carving for itself in the beer market. Based on the malt/hop platform of its premium lager’s namesake, Crown Ambassador is big (10%ABV), bold (fresh wet Galaxy hop flowers) and brassy (presentation box, hand-capped, limited to 7,000 champagne style bottles.

Unfortunately it also has one unintended added extra. Brettanomyces. Brett, to you and me and any brewer who knows his stuff. Actively sought out by those wanting to brew a sour Lambic style beer but assiduously avoided by those trying to brew, say, a layered, super-premium, limited release specialty brew. As an example.

Brett is a sneaky little wild yeast which imparts a firm sourness and some high-end funky aromas - all of which make a good Lambic but are not necessarily welcome in a beer that doesn’t set out to be Lambic. It’s not the end of a beer, in particular one which has such complexity and depth – if anything, if you’re going to get stung with Brett, this is the kind of beer that just might carry it.

Enough of the back story - for those wanting a comprehensive insight into this issue, I refer you straight to The Crafty Pint – it has pictures and quotes and EVERYTHING!!

This piece is my experience of the 2010 Crown Ambassador Reserve Lager as shared with John Cozens and a Wine Bar full of ‘Everyman’. To set the scene; the RACV Club hosts various events for its members and the Beer Masterclass is a small group (30 at most I think) sat in the upstairs Wine Bar. Six beers are served along with ‘light delicacies’ to match and the evening is hosted by an industry expert/ identity.

We began with a standard Crown Lager (not that any present expected to use this as a reference point for the Ambassador!) followed by a Cascade Green (for the Galaxy hop addition – I know it’s in there somewhere) and then onto a side-by-side tasting of the 2010 and the 2009 Crown Ambassador Reserves. A Duvel and a Hoegaarden were set to finish.

John introduced the night and spoke with a genuine warmth of the purpose and method behind producing a beer like the Ambassador. It is always fascinating for me to hear the reasons behind the beers and John conveyed beautifully the way in which this beer set out to be just a beer, not one that would be confined to a particular style guideline. A ‘layered’ beer based on the core Crown ingredients but built up with levels of malt, hops, yeast flavours and high alcohol to give the drinker a series of little experiences on the way down. 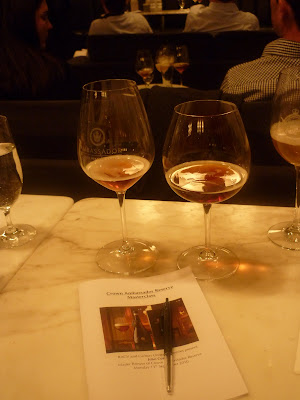 After tasting the 2010 Ambassador John called for comments and the hands shot up. Remembering that most present were not beer industry experts or even craft beer advocates – to be fair, most were rank novices - the response puts into context the problem, as I see it, that Foster’s has created for itself.

The overwhelming reaction was that the beer ‘smelled bad’. “Is it just that it’s a bit young?” asked one “Is that smell supposed to be there?” queried another while others asked if the smell was the hops or the yeast. It was at this point when I felt for john Cozens as he is a brewer but also an employee.

Knowing what I already knew (I had consulted two reliable sources to ensure that the Brett issue had in fact been admitted by Foster’s) I was interested to hear the reply. And it’s not that he tried to say that the Brett WASN’T there but that the ‘youth’ of the beer and the unexpected wetness of the hops WERE suggested as factors in the funky nature of the new flagship brew. I guess I wanted to hear that the beer had in fact contracted an unexpected infection (even if the source is still a mystery) but that this only added to the unique nature of the beer. Perhaps this audience wasn’t the right one for that concept? 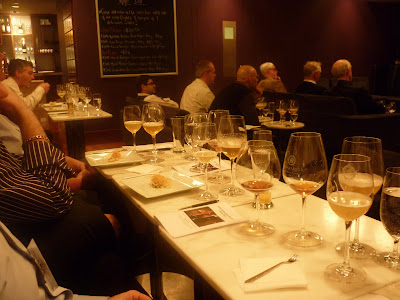 And so to the Prof’s conclusions. [Remember, I’m a pretend Prof, no real scientific qualifications. It’s just a name I made up]

From chatting with John Cozens I can appreciate that Foster’s has a marketing dilemma rather than a brewing dilemma on their hands. Yes, the beer has an unexpected and, indeed, unwelcome addition to the flavour profile. Yes, they would prefer that it wasn’t there because even in a ‘Beer with no Style’ you still don’t want to list “infection” on the ingredients panel. But does that warrant a recall or discount or a public flogging in the town square? Probably not. But an admission that sometimes even under the strictest controls and the tightest testing something can go amiss would have been nice.

I reckon the Ambassador will come good in two or three years and that’s probably as much a hope as it is a considered opinion but I’m happy to wait and see. I still think the concept of the Ambassador is a good one because next year’s Vintage will still sell because there are those who need it to ‘complete the set’ and there are those who will want one as a gift or to display in the boardroom. Who knows, they might even have forgotten all about the stink by then.

“Brett? Wasn’t he the bloke from the second series of “The Farmer wants a Root?”

Cheers,
Prof Pilsner
(Proudly NOT a real Professor)
Posted by Beer Blokes at 14:37

Awesome post Prof. It's good to read about what the Brett...'version' means to the average beer punter or rank novices.

Very keen to hear what people will think of it in a couple of years though I most certainly won't be going out of my way to sample (though that's due to cost - not really sure I could fork out that much dough for a beer that *might* come good with a bit of time).

My decidedly non-beery brother ordered this year's Reserve so will be keen to see if he ends up waiting to drink it. I believe he bought it as an investment...

Ha! The first time the unflappable Prof P has been ruffled by beer.

Brettanomyces is being embraced by quite a few American Craft Breweries as well as homebrewers & it is pretty much confirmed that any Brettanomyces character will only increase with age unless the Brettanomyces is killed with Potassium Metabisulfite, the beer is heat pasteurised or is sterile filtered.